You are here: LitRPG Reads / Blog / More on Pathfinder RPG
Spread the love 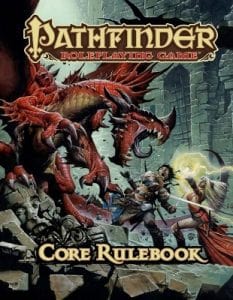 We’ve already done one post on Pathfinder RPG recently, but we left out some information about where this game system is headed in the future.

With that in mind, we’ve put together another blog about Pathfinder Online and Pathfinder: Kingmaker CRPG. We think you’re going to be as excited as we are about this news.

Be sure to read our post on the History of Pathfinder RPG to learn more if you’re new to this classic gaming system that’s been around a while now.

Even if you’ve never played Pathfinder RPG before, we think you’re going to enjoy the new information on Pathfinder Online and Pathfinder: Kingmaker CRPG

Given Pathfinder’s popularity among gamers, it only makes sense the game would eventually find itself inspiration for a massively multiplayer online world. Much like other RPGs before it, it would take a little bit of finessing to bring something that actually resembled the tabletop experience to a video game.

Pathfinder Online’s path to the video game space was a little different than that of other role playing games. In fact, there has been a fantastic amount of work put into making sure that the online game is as faithful to the experience of the tabletop game as possible. The final product should be something that attracts fans both new and old.

Pathfinder Online hasn’t had the easiest time lately, but its initial development seems to have been relatively painless. The game was a collaboration between Paizo, the company behind Pathfinder, and the game developer Goblin Works. As with so many games based on RPG systems, the game’s initial development was largely funded by Kickstarter. It took about two years for game to enter an Alpha build, and another year for early enrollment to start.

Unfortunately, things started to fall apart only a few months after open enrollment began. Most of the developers were laid off, with the game kept in an uncertain limbo for quite some time. Goblin Works has announced a roadmap to bring the game to completion, but even that is nebulous at this time. 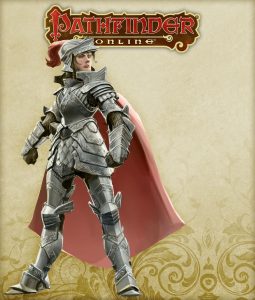 These classes are only archetypes, though, and players are given the chance to branch out from their basic skill sets to take skills from the other archetypes. There are benefits to be found for those players who stick with a single class, but the game does allow for a great deal more customization than the average fantasy MMO.

One of the major issues with Pathfinder Online surrounds exactly what kind of MMO the game was meant to be. There’s a fine line in the sand between the two major types of massively multiplayer games out there, the sandbox and the theme park. While the latter has had the most success, there are quite a few adherents to the idea that the former better captures the spirit of games like Pathfinder. Naturally, Pathfinder seeks to incorporate elements of both types of game, with a stronger emphasis on the sandbox aspects than on the theme park elements.

If you look at the developer statements on the Pathfinder Online site, you’ll see a rather strong adherence to the philosophies behind the development of a sandbox game. The developer seeks to make sure that the experiences in Pathfinder Online are of a sandbox nature – i.e., developed by the players. The bulk of the experience in Pathfinder is meant to be emergent, just as it would be in the tabletop version of the game. This means less guidance for the players and fewer of the typical road maps for those who have been playing MMOs for the past decade.

This is not to say that there isn’t environmental content in Pathfinder Online, though. There seems to be just enough there to make sure that players have something to cling to in case they are overwhelmed by the choices offered in sandbox play. This is fairly typical of the more successful games in this genre, especially when they seek to reach out to a mass audience. There haven’t been many truly successful sandbox MMOs, though, so it is yet to be seen how players will react to Pathfinder Online. If nothing else, the game is truly ambitious.

Pathfinder Online was created as a sandbox game because the developers wanted players to feel a sense of persistence. Their argument is that a theme park world doesn’t really give players a chance to feel like they have made a lasting impact on the world around them. In a good sandbox, though, players should feel like all of their actions can actually help to shape the world. The vast majority of the objects in the game, ranging from the crafted materials to the buildings, are meant to be designed by the players. This means that every action is, in some way, impacted by the player base. So long as there is an active base, the game can grow.

Persistent games often find problems when the players aren’t suitably rewarded for participation. Pathfinder seeks to remedy this by making sure that virtually every item that a player needs to progress must come from other players. This means that players won’t be fighting over loot drops, but rather participating in a robust economy that requires the participation of every player. What this will mean to players who come to the game later, though, is still in flux. A major issue that has surrounded sandbox play is that those who get a late start are often priced out of the economy.

While the Pathfinder MMO might be on shaky ground, there is another more traditional Pathfinder game on its way. Pathfinder: Kingmaker is a traditional CRPG, one that also seeks to capture the spirit of the original game as faithfully as possible.

While the social interactions that characterize the tabletop game won’t be present, there’s a good chance that the design of the game will be able to draw players into the world just as well as they would with an MMO. Thanks to Kickstarter, this game may be able to bring to the computer a more faithful Pathfinder experience than ever before.

Pathfinder: Kingmaker has brought with it an incredibly impressive design team. Even though the game is funded by Kickstarter, those who are designing the game are true professionals. Nowhere can this be seen better than with the narrative designer, Chris Avellone.

Avellone is very well known in the world of CRPGs. As a former member of Black Isle, his handiwork has been seen on games like Fallout 2 and Planescape: Torment. With Obsidian, he also worked on Knights of the Old Republic II, Neverwinter Nights 2, and Fallout: New Vegas. He’s even worked on recent titles like Arkane Studios’ Prey.

Of course, Avellone isn’t the only veteran on the development team. Owlcat games is full of developers who have been in the CRPG world for decades. These are people who don’t just understand the technical aspects of computer RPGs, but who also understand how to create games with soul. It’s a great start for a game that really needs to stand out from the crowd.

Putting together a solid development team is a great first step for Kingmaker. With the right hands steering the ship, it’s possible that this game could break out from an increasingly crowded CRPG crowd. If nothing else, this development team inspires a great deal of confidence.

A huge part of this game is the ability to build up a kingdom in the game’s setting. One won’t just put together a small town – one will rule from the throne, building settlements and deciding the fate of the kingdom itself. Instead of making decisions only for a single party, players will get a chance to flex their kingly muscles in a way that’s not common in most CRPGs. While this isn’t the only focus on the Pathfinder RPG, it’s certainly one of the focuses that is the most interesting.

Given that an much-praised aspect of the most successful role playing games is how they handle moral choices, Kingmaker is off to a good start. Players will be given a chance to figure out if they can rule benevolently or if they want to rule with an iron fist. Hopefully, the decisions are not always clear cut and players will actually have to think and make sacrifices so they can get what they want out of their kingdoms. Taking this type of management into deeper territory will allow Pathfinder to stand out from the crowd of CRPGs that are set to release over the next few years.

Given that the game is backed by donors, there are a truly tremendous number of possible Kickstarter rewards. The vast majority of the rewards don’t have any real effect on the game – they come in terms of acknowledgments and game copies. At the higher tiers, though, donors are given the chance to make a real mark on the game.

These start with things as simple as helping to design a single item, and they range up to helping to design an important NPC or even a dungeon. At the highest level of donation, players will even get a chance to own every game made by Owlcat for the next decade – though at ten thousand dollars, this is probably out of the range of all but the most obsessed Pathfinder fans.

Pathfinder’s road to the PC hasn’t been easy, but it’s getting better. While the MMO is still experiencing trouble, things look bright for Kingmaker. These games will help to improve the profile of Pathfinder and allow gamers to become more familiar with that universe. All told, that’s not bad for a game that was created under the shadow of Dungeons and Dragons.