You are here: LitRPG Reads / Blog / History of the Talisman board game
Spread the love

There are certain board games that transcend the boundaries of Monopoly and Life. These games present an adventure, one that takes skill and cunning to get through. These are the games that are the cousins to the tabletop RPG, and they’re more than worth playing.

If you’re into board games, you already know that Talisman is one of the biggest names in this sub-genre of games. The Talisman board game stands out above most of its peers. As interesting as the game is, though, there’s something even more interest – its history.

If you want a real adventure, you’ll need to look at how this game came to be.

The earliest form of Talisman was pretty different than what you see today. It wasn’t quite like the tabletop board games of the 70s and 80s, having more in common with D&D than anything else. It was not, however, a fantasy game.

No, this was a game about becoming a prefect at a school.

As you can imagine, this wasn’t a game that would sell well. It didn’t take too long for the setting of the game to switch, eventually becoming a fantasy game.

The game made its debut in 1983, setting the tone for what would come next.

The characters from Talisman ended up as fantasy archetypes in other games. The first and second edition had characters that included:

Future editions of the game would add dozens of other characters, overwhelming the possibilities until they’d be reeled back into a more manageable number.

First edition Talisman was fairly barebones. It featured black and white cards but kept most of the other mechanics. Second edition would feature colored cards and a better quality game board.

Both versions of the game allowed players to pick a random character who would be defined by his stats. The basic goal would be to level up a character enough to eventually win the game.

Simple, sure, but still revolutionary for the time.

The first and second editions featured a library of expansions. These expansions would add new adventures, characters, and sometimes mechanics to the game.

In many ways, Talisman was more like a tabletop RPG than any board game that was out at the time. Imitators would soon be on their way, but nothing ever really matched what Talisman could do.

As the second edition sold, Games Workshop became more than just a publisher. The company was responsible for most of the expansions. In time, it would end up buying the designer’s interest in the game and moving on. 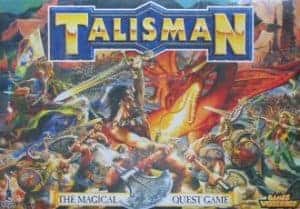 Third edition made a few new changes to the formula. The board would be redesigned, with better art and new locations.

This would also be the edition that did away with the character cards and replaced them with miniatures. While it might seem like a small move, it made the game feel much more solid than in the past.

This edition also introduced the ability to gain experience. Experience made the game even more like an RPG, and allowed players to better customize their characters.

Third edition had a few expansions, though not quite as many as second edition. This is perhaps the version that was most commonly played in the 1990s.

Fourth edition was first released in 2007 with some major changes. Quite a bit had been reverted back to the Second Edition status quo. The board would be enlarged, and the character classes would be extended to 14 base characters.

In 2008, the license to Talisman was transferred to Fantasy Flight Games. While they took over the Fourth Edition concept, they also introduced a host of expansions.

Thirteen expansions ended up being released by 2015, some of which changed the game more than others.

The Talisman board game has a legacy that goes way past tabletop board games. It was a definitive experience for many players, who then went on to develop other games.

There are plenty of Talisman clones in the board game world. Any game that has specific characters and challenge cards owes a huge debt to this game.

At the same time, Talisman is a definitive influence in the video game world. Ironically, though, Talisman games have never really taken off on PC or consoles.

This is a game that’s worth playing, if only for its history. You wouldn’t get many of the complex board games or RPGs that dominate the field today without Talisman.

Want to geek out about Talisman even more? Head over to the gaming area of LitRPG Forum!

My Gaming History: Part One