You are here: LitRPG Reads / Blog / What Makes for a Good RPG?
Spread the love

A good role playing game is founded upon some very important categories. It is a building process that involves a lot of thoughts and “what if” scenarios. The creative minds behind the development of the best RPG games were born with an embedded skill that cannot be replicated or transformed in duplicate fashion. Maybe it’s not all that complicated, but there are many years of trial and error that go into the development of these kind of games. So, what makes for a good RPG game? Below we’ll focus on some of the top selling points and list the negatives that make up the mishaps as well. 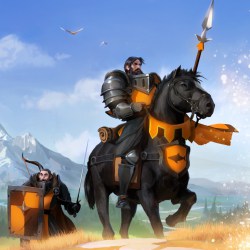 The storyline is the main selling point of all RPG games. Without it, the game lacks a taste, a flavor, or any potential intrigue status. The storyline must be well developed, featuring multiple playthrough options. The games that hold the most intrigues are the ones that feature multiple outcomes.

The multiple outcome setting is what keeps gamers coming back the well for more. Interactive language and selective options make accomplishing these outcomes a little simpler in scope. Responses to questions that change the outlook of the gameplay helps keep the interest level high and places decisions in the back of the gamers mind for future reference.

A second key is the use of a solid graphic design programmer. The facial expressions of characters, the attention to detail in the armor of the enemy, and a picturesque look at the terrain of foreign lands all mark for key components of a great role playing game.

These factors help emerge someone into the created world or space presented via a round disc. The game becomes greater than itself and pulls the player along with it. Visuals represent an important intrigue factor and it is easy to lose someone’s attraction if the extraordinary is replaced by plain views and poor taste.

Characters with a Pulse

To humanize the decisions of the main character is the key to the user’s heart. They need to level with the character and attribute the character’s actions to their attitude or mental/physical capabilities.

Creating a character that does the unthinkable will reduce the intrigue of the game and the storyline alike. The programmers that make the struggles, successes, and other attributes of these characters seem real are the ones who find the most success in this space.

What About Bad RPG?

To make a bad RPG, simply reduce the descriptions above. While it seems like it should be more complicated than stated, that is the key to a bad game. Other aspects of bad role playing games include, but are not limited to the following:

Literature featuring the undertones of video games is slowly becoming popular among the reading and game playing community alike. It is a sensation that brings fans closer to the tales they read on screen. Taking this form of language and translating it to paper allows fans to take their storylines anywhere they may go.

LitRPG can also be used to guide players through some of their favorite games. Listing out the certain advancements and damages done with numbers can assist players in achieving a certain supremacy with a game. It also brings new meaning to game-play guides and will continue to develop on a large scale basis as time goes on.