You are here: LitRPG Reads / Blog / Ashes of Creation MMORPG
Spread the love 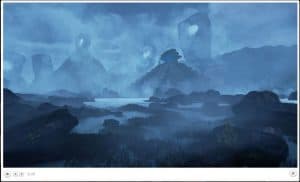 Massively Multiplayer Games Role Playing Games are in a strange space at the moment. While there are a handful of very successful free to play titles, the traditional games are all but dead. With a few notable exceptions like World of Warcraft and Final Fantasy XIV, most recent subscription-based games have crashed and burned.

Why? Some would say it is because these games continue to try to follow the leader, never really innovating or differentiating themselves from the pack. One game that seeks to buck that trend, though, is Ashes of Creation. The game has a solid team behind it and looks to change the way that players interact with MMORPGs.

Ashes of Creation is a game by Intrepid Studios. If you haven’t heard of Intrepid before, that’s not a surprise. It’s not a large studio, nor is it one that’s well known in the industry. In fact, it’s a studio that really doesn’t have a pedigree yet. It’s an odd entrant into the MMO space, but it does have a handful of individuals who have a great deal of experience in the video game world. It’s a studio that’s banking on experienced talent to help it overcome the studios’ lack of experience in developing games. Luckily, the people who work for Intrepid are exactly those you’d want on a project of this scale.

There are a few big names from gaming world at Intrepid. Kevin McPherson, the lead programmer, is well known for his work on both of the EverQuest games as well as both PlanetSide games. Lead technical designer Akil Hooper is a fellow EverQuest alum who also worked on Fallout: New Vegas. The game’s senior character artist, Mat Broome, worked on both EverQuest and PlanetSide 2, and has experience with DC Universe Online and H1Z1. Rounding out the big names is Rocco Scandizzo, who has twenty years of experience with companies like Psyop, Activision, and Vivendi.

Even those on the team that aren’t big names in the gaming industry have worked on big projects. Most of the core team comes from those who worked on either EverQuest or PlanetSide. This means that the core team not only has a great deal of MMO experience, but that they have worked on some of the most cutting-edge titles of their time. While you won’t see many names from teams that have created the latest hits in the space, having a team with experience is still something that cannot be discounted when looking at a project of this scale.

Ashes of Creation is an MMO that seeks to build upon the attempts of several that have been released in the last several years. As it’s become increasingly clear that the “amusement park” model of MMOs is one that will always be dominated by one or two major players, the game’s developers have sought to create a game that would go in the other direction. Instead of creating a tightly controlled experience that is similar for every player, Ashes of Creation relies on a dynamic sandbox experience that prioritizes constant evolution. It’s something that’s been attempted several times at a small scale, but rarely to great success.

A major component of Ashes of Creation is housing. Housing’s been a part of MMOs since almost the beginning, of course, but Ashes of Creation takes the concept to another level. Player housing can be almost anywhere in the world, so players have to decide how much freedom they’d like to have in the world. Those who want unlimited freedom can go out into the wilderness, developing larger plots in their own vision. If players want safety and the ability to profit from the presence of other players, though, building in a village is a better path. There’s no right answer, but the choice does make player housing much more important than in other games.

(More video at the Ashes of Creation thread at LitRPG Forum.)
Questing is also taken in a unique direction. While there are some of the standard MMO quests in the game, there are also quests that can permanently change the world. These quests, as one might imagine, aren’t the kind that can be repeated over and over again. While those that operate on a small scale might come back around in the future, there will necessarily be some quests that people will never see. What everyone will see, though, is the changes that are wrought. This makes each individual quest much more important than it is in the average MMO.

The Player versus Player content in the game also has a unique twist. On one hand, it does follow the typical flag model with a few zones that are static PvP zones. Player versus Player isn’t just for show, though – it can change the face of the world. Who controls resources and territory will be determined by who wins in these battles. There are also massive sieges to control the few castles in the world, each of which is a store of resources and a great place to store loot. There’s even a chance to battle with diplomacy, in which a stroke of the pen can be just as powerful as the stroke of a sword.

Taken together, the unique aspects of Ashes of Creation come together to create a game that is always in flux. This is incredibly appealing to MMO gamers who are tired of seeing a world stay the same no matter what they do. Whether the game has what it takes to pull off its ambitious aims, though, is yet to be seen. It seems like all the pieces are already in place for Ashes of Creation to succeed, it just needs to the players to help it take off. With a little promotion and a lot of effort, Ashes of Creation might be the cure for what ails the bloated MMO market.

One of the best ways to learn more about any MMO is through its community forums. The best games out there have forums that have, at the very least, a healthy level of activity. The level of discourse might not be exactly what all the players want, but the clear passion of fans generally means that the game is going well. Even negative posts are a good thing, because it means that someone out there cares. What games should always strive to avoid is a dead set of forums. If no one’s posting, it generally means that there’s not enough of a player base out there to really care about what’s happening in the game. 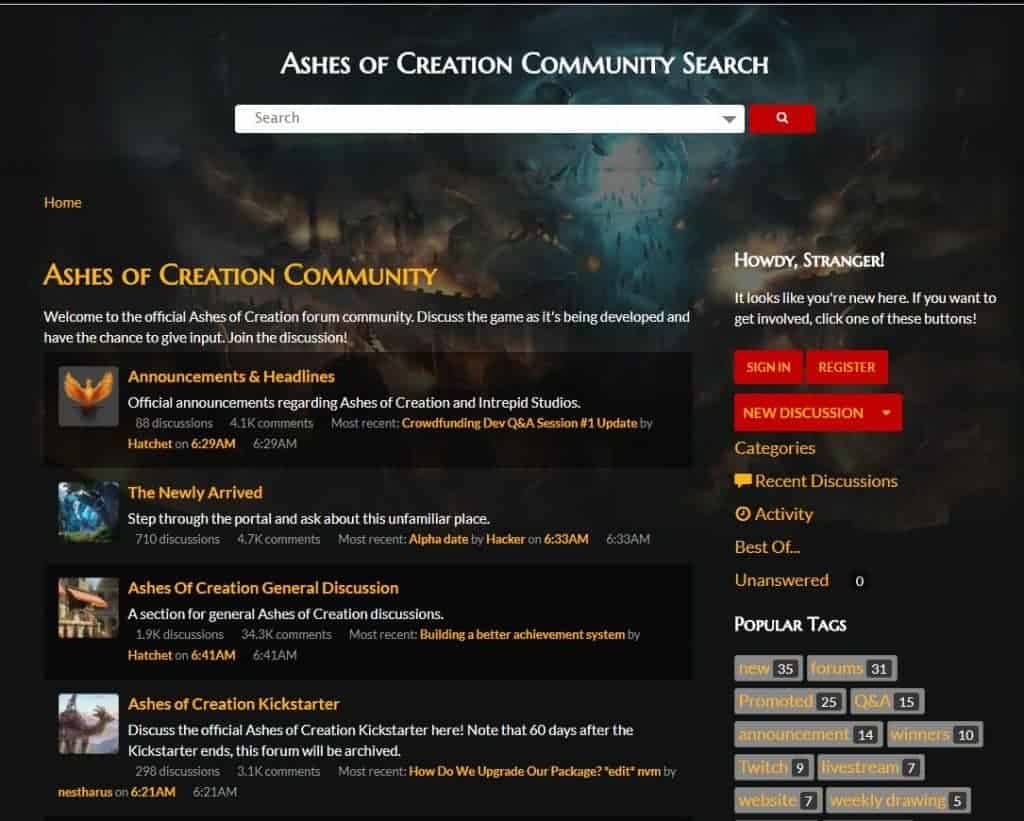 Ashes of Creation has a fairly healthy forum community. It’s about the right size for a game of its stature and players post on a regular basis. There’s a few different spots where people can go to discuss game issues, as well as places for people to share their own creations. There’s also a spot for official reactions, which tends to mean that there’s still a strong connection between the developers and the players. The boards are in a good place right now, which means that the community still backs the game. With a solid community in place, the game still has the ability to succeed.

As seems to be the norm these days, there are a few different crowdsourcing packages available for those who are willing to help fund the further development of Ashes of Creation. The basic levels give out game time, customization packages, and special titles. The higher tiers give out more appearance options, unique pets, and more customization options. At the highest levels, donations give players access to unique features, tours of the game studio, and invitations to the launch party. All told, the tiers are locked behind what are relatively low donation thresholds for a game Kickstarter – the highest level is just over five thousand dollars, and the lowest at twenty-five dollars.

It should be noted that Ashes of Creation doesn’t make any grand claims. It’s not out to be a WoW-killer or to take over the industry. Instead, the game’s development team seems to have a particular focus on making players happy. They’ve set a high bar for themselves and currently seem to be throwing everything they can at accomplishing their goals. It’s nice to see an MMO that puts players ahead of its ambitions, especially when it’s a game that really does seem innovative. Ashes of Creation might be the cure for what ails the MMO industry.

More on Ashes of Creation?

We’re having a discussion on AoC MMORPG over at LitRPG Forum. Join us. Or lurk. Your choice.