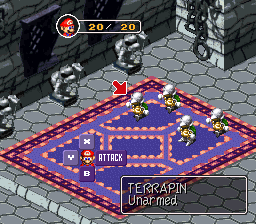 Anything can be an RPG. All you really need is stats, a story, and a good system in which everything can take place. There’s no better example of this fact than the existence of the Super Mario RPG series. Yes, Super Mario – the tubby plumber who is best known for being the shining mascot of the platformer genre – stars in his own RPG series. If you take a look at everything that went into the series, though, you’ll understand not only how it works, but why people have kept playing the series for decades after its initial release. This is one RPG that is worthy of both study and play.

Mario RPG started as the solution to a sales problem. Square (now Square-Enix) had successfully published a few role playing games in Japan, but their success had been somewhat more limited in Japan. Even worse, those games that had sold reasonably were doing particularly poorly among female gamers and young gamers. They needed a way to help introduce console RPGs to those groups, but their typical output just wasn’t working. They needed a character to which players could attach themselves and thus be drawn into the burgeoning genre.

At the same time, Shigeru Miyamoto was beginning to think about Mario in the context of other games. One of his goals was to put Nintendo’s flagship character in an RPG. Square and Nintendo managed to get together, and from that point the genesis of Super Mario RPG: Legend of the Seven Stars.

The game itself was a combination of Square’s Final Fantasy and Nintendo’s Super Mario platformers. Players would be able to move like in Mario, but the battle sequences were turn-based and drew heavily from traditional RPGs. This made the barrier for entry much lower than in the traditional games, while adding a bit more movement for traditional RPG fans.

As far as most Western gamers are concerned, this is the first Mario entry to have an actual coherent story. The game follows Mario and company after a giant living sword crashes into Bowser’s castle, scattering Mario’s companions and seven star fragments throughout the Mushroom Kingdom. The game is one of the first to show Mario teaming up with Bowser and it also greatly increases the supporting cast of the Mario franchise. The group tackles a number of typical RPG problems on their way back to Bowser’s castle, eventually leading to victory for the team and allowing them to go back to their normal lives.

The game features a number of characters who are both well-known and somewhat obscure. The main character is, of course, Mario himself. Joining him from the platformer series are the perpetually kidnapped Princess Toadstool and Bowser, his usual nemesis. New to the series are Mallow, a cloud boy who believes himself to be a tadpole, and Geno, a spirit from Star Road who currently inhabits the body of a doll. There are plenty of cameos from other Mario characters, including the Toads, Luigi, and Yoshi. The main antagonists are the Smithy Gang, led by an extradimensional blacksmith who wants to take over the world of the games.

Super Mario RPG is one of the most unambiguously loved RPGs of all time. It was a major commercial and critical hit upon release both in Japan and in the United States. Reviewers tended to praise almost every aspect of the game, from its battle system to the humor inherent in its plot. It was considered a great game for both RPG pros and for novices as well as a good game in its own right. There were the usual complaints from a few critics, but they were few and far between. The game currently holds an 89% average on Metacritic, which is surprisingly high for a game from that time period.

Super Mario RPG is also a game that has benefitted significantly from hindsight. It is regularly considered one of the best games to have been released on the Super Nintendo and usually occupies a high position in the lists of best games of all time and best RPGs of all time. There is a level of quality inherent in the game that has stood the test of time and remains with each subsequent play-through.

Super Mario RPG never received a direct sequel. Though one was eventually announced by Nintendo, the series was instead spun off into two spiritual descendants. As the newer games were not made in collaboration with Square Enix, few of the characters and locations from the original game show up in the spin-offs. Even with this said, it’s clear that the spirit of the game lives on.

Console RPG fans were able to follow up Super Mario RPG with the Paper Mario series. The game exchanged the original’s style for a 2D paper cut-out style, though it kept many of the same systems in place. Players who preferred to play on handhelds were able to play through the Mario and Luigi series. These games also kept the same basic systems in play, though they did add a few twists as the games grew and changed.

While Mario RPG may not have gotten a sequel, the original game is still popular. It was released for the Virtual Console in 2008 and became one of the most downloaded titles on the service. This is one series that isn’t going away any time soon.

With a lot of love and effort, Super Mario RPG became a hit franchise in its own right. Not only did it manage to put together a great plot and great mechanics, but it managed to keep the charm of its parent series intact throughout every iteration. This series is a shining example of how you can turn any property into an RPG, even if the fit is not immediately obvious. At this point, there’s no question of whether Mario RPG is a success – it’s always a question of whether the next game in the series can live up to the legacy.