You are here: LitRPG Reads / Blog / The History of Pathfinder RPG
Spread the love 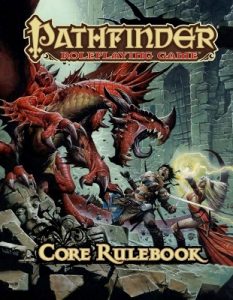 To understand Pathfinder, you have to understand the split in the RPG community that occurred around 2009 – and how that split continued to define the genre. This is a game that helped change the course of roleplaying history and, in its own unique way, even helped to develop the LitRPG genre.

Pathfinder’s history really starts in 2007. At the time, the Paizo RPG publishing company had been publishing the two major D&D magazines. When Wizards of the Coast decided not to continue that relationship, the Pathfinder line was created.

Initially, the line was considered a set of off-brand supplements for D&D 3.5, but they were largely successful thanks to the care that the Paizo RPG writers put into the magazines. If history had stopped there, it’s likely that Pathfinder would have become little more than a footnote in video game history – something that might have initially been folded into the D&D whole, perhaps, but not something that would become its own product.

The Pathfinder RPG really got its start because of WOTC’s decision to iterate upon Dungeons and Dragons once again. The new version of the game, dubbed 4.0, would radically change the rules of the game and come with a more restrictive publishing license.

This not only spelled trouble for many of the publishers who had been using D&D’s 3.5 system, but some very unpleasant news for those gamers who had come to love 3.5. The new version would be more “user friendly”, but it catered more to an MMO style than the game play that had come to define D&D over the last several years.

The Pathfinder RPG certainly had more in common with the roleplaying games that came before it than it would have in common with D&D 4.0. Using a modified version of 3.5’s gameplay – dubbed 3.75 by some players – it provided the same kind of fantasy game play that players had come to know and love while providing a few of the subtle changes that had been in play in the Pathfinder periodical. As time has gone by, the Pathfinder brand has continued to gain steam and has grown from a copycat to a fully-fledged product line of its own.

Pathfinder is one of those unique RPGs that seems to have little drive to bring in new players. Instead, it caters almost exclusively to the “hardcore” gaming crowd. These are the kind of players who would probably enjoy the LitRPG genre and other related RPG projects. While all role playing games have a unique history, Pathfinder’s is especially interesting because of the intentions behind its creation. This is not a game for the sake of the game – this is a game that is meant to give players exactly what they want.