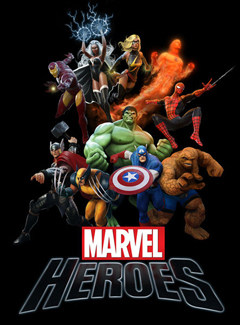 Marvel has never had a fantastic amount of luck with its video game properties. Most of what it put out prior to 2010 was largely in the realm of rushed tie-in products, with one or two games that really rose to the level of adequate. Things did, however, start to change once Marvel got serious about its movie properties and how they appealed to gamers.

While many of these games were still hit or miss, it started to become apparent that the company really cared about its games. There are now a string of small titles that tend to fly under the radar but that have strong player bases. One of the most successful of these titles has been Marvel Heroes.

Marvel Heroes began life as a free to play brawler on the PC. The game was very similar to bigger hits like Diablo, with the added bonus of being able to play Marvel characters. While the earlier iterations were a bit rough, the game improved by leaps and bounds. Now a bonafide success, the game has released on the Playstation 4 and XBox One under the new moniker Marvel Heroes Omega.

One of the few fully-realized MMORPGs on the consoles, it now has a chance to really explode in popularity.

The story of Marvel Heroes Omega takes place in a unique version of the Marvel universe that combines elements of both the comic and movie plot lines. Characters are tasked with going after Doctor Doom, who intends to use the power of a reality-altering Cosmic Cube in order to reshape the world to fit his own image. Doom has freed a huge gathering of super-villains in order to make sure the heroes are not able to chase after him, as each of the villains have their own plans for what to do now that they are freed.

The story itself is constantly expanding and was designed by comics super-writer Brian Michael Bendis. As such, there’s a great deal of focus on the dialog between characters and a very comic-book based feeling in all that is going on in the game. This is as close to playing a comic book as one can get, especially with the presence of characters who aren’t able to interact with one another in the movies. It’s a great look into the Marvel Universe and the depth of the story is ideal for those who are already comic fans. 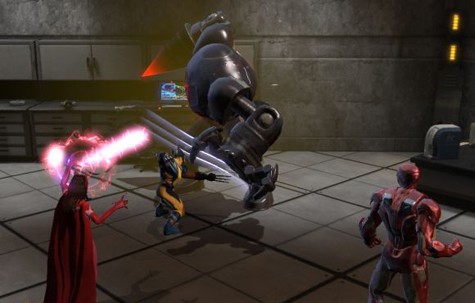 Marvel Heroes Omega is an Action RPG (ARPG), which meshes the play style of an arcade brawler with the leveling and power sets of an RPG. Players interact with quest-givers who give them specific tasks and generally fight their way through instanced content in order to fight a boss. Along the way, the characters will develop new powers and collect gear to enhance their stats. The game is incredibly similar to other ARPGs on the market and definitely took a great deal of inspiration from games like Diablo II and Marvel Ultimate Alliance.

The game is unique in that players don’t play as generic characters – they play as heroes from the Marvel universe. Heroes are the main source of income from the game, as players are required to spend in-game Eternity Shards to unlock the heroes of their choice. Players are given the ability to play any character up to level 10, but they must then unlock the characters to proceed. Fortunately, it’s possible to gather enough shards during the leveling process for most players to unlock at least one of their favorites.

Omega is also one of the very few ARPGs that has raids. These tests of skill involve huge groups of players tackling major obstacles. There are currently two raids in the game, with more likely on the way. This helps to cement Marvel Heroes Omega as more of a classical MMO with a real end-game challenge.

Another truly fantastic feature in the game is that a player can fully level a character just by playing through the story. That means that, in theory, every player is good to go for the end-game as soon as they are done with the story. This is a feat that most traditional MMOs are not able to accomplish, so it should be something for which this game is praised.

If a game’s health is measured by its community, it must be said that Marvel Heroes Omega is incredibly healthy. The forums are usually bustling with activity, though much of it is complaints about balance issues for newer heroes or issues with player-specific problems. It’s really no different than the forums for any other MMO, but it does seem more lively than what one would expect to find on the average free to play forums. Players can easily register and participate, though it’s obvious that a few major voices tend to drown out most of the conversation.

It’s important to note that the PC and Console forums are totally segregated. This is usually a good thing, as the PC version of the game has a few different characters and its own set of technical issues. As such, players are always able to find data that is important for their version of the game.

Every game has its secrets, and most are good to know before you boot up your console. Below are a few tips and tricks that will help you to get the most out of Marvel Heroes Omega:

Marvel Heroes Omega is one of the most fleshed out free to play MMORPGs on the market. It’s certainly one of the best on the consoles, with its player-first attitude and the relative ease of unlocking content. This is a great brawler and a great game for introducing MMO mechanics to new players. Marvel Heroes may have gotten off to a relatively rough start, but it’s more than clear that this has become a game that any Marvel fan would love to play.