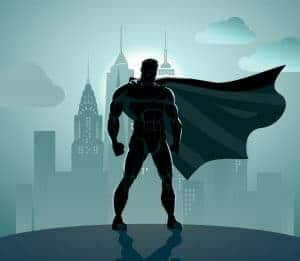 Looking for Superhero RPG (pen and paper)? We have you covered…

It’s not much of a stretch to say that superheroes are in the midst of a golden age. While comic sales might not be at their all-time highest point, superheroes dominate the movie and television industries. It’s no wonder, then, that people are always on the lookout for ways to feel more like heroes themselves with superhero tabletop games.

One of the most popular ways to have a super-heroic experience has long been in the form of tabletop games. These games allow players to create their own heroes and live out the adventures they have always wanted to experience. Below are just a few of the most influential games in the pen and paper Superhero RPG world.

Published in 1977, Superhero 2044 is can easily be considered the grandfather of all other superhero role playing games. While far from perfect – reviewers thought the rules were arcane and primitive – it really was the first game to allow players the chance to step into the role of a costumed heroes. With detailed rules on how to create a character who would fall into one of three basic superhero archetypes, the game gave players a chance to live out their four color fantasies at the table top. While the rules are difficult to parse by today’s standards, they were created before there was any kind of standardization for how a role playing game should be put together.

Superhero 2044 featured a very unique system for how it was played. Players would have the traditional face-to-face encounters with the person running the game, but they’d also have to fill out a sheet that detailed what they were doing for the rest of the week. This would include when the player patrolled, rested, and researched. During the play sessions, players would actually receive a score for how they completed the scenario – something that has all but been abandoned in the genre.

Superworld, published in 1983, was originally just one of three rather generic settings for a single rule set. Superworld, though, proved to be something special and became a game in its own right. It provided the rules necessary to create superheroes – not just those who fit specific archetypes, but almost anything that a player could imagine. Powers were taken as effects, not as powers themselves, so players were free to adapt those effects into almost anything they could imagine. It helped to create a sense of freedom that was otherwise hard to find in many of the games that had been published around the same time.

Today, Superworld is probably better known for its legacy than for its actual game play. While the game itself was quite well-made, it certainly didn’t offer much that the better-known Champions didn’t already do better. The amount of customization available, though, did allow players to create fantastic worlds that could be adapted to other settings. Perhaps the best known was created by a young George R.R. Martin, who would be inspired by one of his campaigns to create the still-running Wild Card series. If a system is good enough to inspire the author of the Game of Thrones series, it’s probably still worth a look.

In 1979, Villains and Vigilantes would become one of the trio of the earliest-published superhero games. While most games allowed players to create a character that fit their own vision perfectly, Villains and Vigilantes was interested in making things just a little more random. Players would start with a character who was, at least in theory, based loosely on the player himself or herself. That would be the secret identity of the character, who would then receive his or her powers via random roll. This made for some fairly interesting characters and allowed for players to have experiences a bit outside of their usual gaming comfort zones.

Combat and leveling also worked a bit different in this game. While players would advance in level and hit points over the course of the game, their powers never changed. This made the game play very different at low and high levels. The game also provided a unique combat system that really focused on the interplay of attack and defense powers. There was a chart available that showed just how well any given power worked against the defensive powers of the target. This made for slightly more complex combat than was available in most of the similar games of the time period.

It shouldn’t be surprising that some of the big players in the superhero role playing game world were the actual comic publishers themselves. Marvel had three major entries in the tabletop RPG world, but by far the most interesting was the 1998 Marvel Super Heroes Adventure Game. It was a truly unique type of role playing game, one that both encouraged players to create their own characters and use one of a pre-selected roster. It also made use of a deck of cards instead of dice, helping to differentiate it from much of what was already on the market.

The Fate Deck was a deck of 96 cards that were divided into five suits. These cards would be used to determine whether actions were effective as well as the outcomes of the actions. While the system was a bit hard to get used to for people who had been using dice for years, it actually provided for a fast-paced system that was easier for new players. The system of ranked abilities and edges would later be adapted to several other systems, proving that the Marvel RPG was probably ahead of its time. While not the last iteration of the game, it is the one that stuck most heavily in the public consciousness.

Mutants and Masterminds is a good example of what you get when you introduce superheroes into a fairly modern role playing system. Built on Wizards of the Coast’s d20 system, the game is perhaps one of the easiest to play on the market. While it shares a great deal of the basic mechanics with games like D&D, it’s very much its own creature. It’s a good idea to consider Mutants and Masterminds as one of the few superhero games that doesn’t have to hold on to legacy systems. Built from the ground up in the 21st century, it’s a great example of modern game play.

Like most other superhero games, Mutants and Masterminds allows players to build virtually any kind of hero. There aren’t classes, but rather power levels that a character advances through. Unlike most role playing games, Mutants and Masterminds tends to start players at a relatively high level of power. This helps players to better inhabit the role of a superhero and allows for a game play that is based more on power fantasy than a traditional role playing experience. It’s a great game to play for people who want to get right into the action. While it doesn’t necessarily provide for the same kind of growth curves in power as some other games, it is nonetheless a fantastic superhero game.

Champions has long been the go-to game for players who are looking for a superhero role playing experience. While not technically the first superhero game ever released, it’s the model on which most are built. It gives players the ability to create heroes of virtually any type and to allow them to grow and change over time. The rules, while complex, allow for the best modeling of a heroic campaign out there. There’s a huge learning curve for those who want to play the game and the character creation experience can take hours, but those who make it through the process are rewarded with a fantastic game.

Champions also has a fully-realized universe that’s been developing through the various editions of the game. Its setting is actually robust enough that’s it has been able to support a long-running massively multiplayer RPG and a long-running play by email game. It’s one of the richest role playing experiences around, especially for those who are willing to put in some effort. While it’s not an easy game to pick up by any stretch of the imagination, it’s almost impossible to find a superhero game that provides players with more. Definitely a must-play for those who really love superhero games. 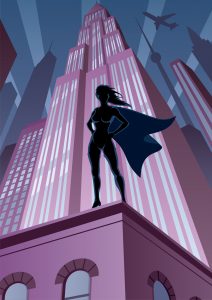 Some superhero role playing games don’t get the attention they deserve. DC Heroes, published by Mayfair Games in 1985, is one such game. It used an incredibly unique system to allow DC’s various heroes to coexist with one another and a very intuitive system for actions, but it never quite gained the traction that it deserved. While most of the games mentioned here are very easy to find, this game has been out of print for decades. It’s a shame that this is the case, though, as the systems used within really did help players to create scenarios that were in line with the DC universe of the time.

DC Heroes took the unique tactic of making skill points logarithmic in nature. This kept the scores low, though power could scale wildly. This would allow players to stay in the fight longer even when they were quite outclassed. The various other scores were used universally, allowing players to figure out somewhat unorthodox calculations on the fly. While the game could seem math-heavy on the surface, it was very easy to play after a session or two. It was one of the rare superhero games that really allowed players to perform superheroic feats without having to spend an excessive amount of time looking through sourcebook tables.

There’s a reason pen & paper superhero role playing games are still popular. The games listed above are some of the best examples of the genre, but they certainly aren’t all the games that are out there. As long as comics are being published, there will be an audience for this type of game. Players will continue to have many options in this genre for years to come, with the biggest changes always coming in the form of new mechanics. While there’s no one right way to play, one thing is for certain – the more a system allows a player to do, the more the player will love the game.

Head over to the LitRPG Forum for more information.