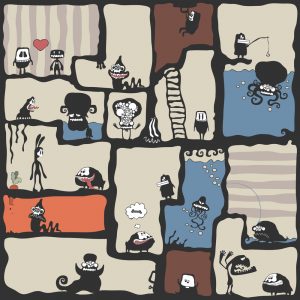 Horror is a fascinating genre. From books to movies, people have always delved into that which has scared or unnerved them. It should come as no surprise, then, that so many people have sought out role playing games that do the same thing.

The horror genre has been a huge part of the role playing community since near the beginning, with several different games providing players with their weekly doses of terror. Below are a handful of the most important games in the genre, each of which has provided players with a new way to experience terror through the safety of a game.

No rule books or player manuals were harmed in the creation of this blog post. We swear, Angie, it wasn’t us! Seriously, if you’re into fun and pop-culture infused horror or the more sinister variety, we’re sure to have a game you can call your own. Sit back and take a stroll down the virtual video game aisle.

All Flesh Must Be Eaten

This game is, in many ways, the father all of zombie roleplaying games. It might not have been the first to introduce the ideas of zombies to horror gaming, but it was the first to put them front and center. All Flesh Must Be Eaten threw players into a world where the living dead were the main adversary, but where humans could be just as deadly. The game’s campaigns were often a matter of survival, eschewing the grand goals of most tabletop games for something a bit more mundane. It was one of the earliest, best ways to really get into the zombie apocalypse.

All Flesh Must Be Eaten is also notable for providing a huge number of supplements to help players take zombies in new directions. The core of the game concerned Deadworlds, which all had their unique takes on zombies and on how player characters would deal with them. With the help of supplements, players could create cyberpunk zombies, space zombies, Old West zombies, and many more. The game provided just enough to guide players while letting most of the work be done by player imagination. It was a fantastic system for those who really wanted to get into the walking dead.

In retrospect, it seems natural that one of the landmark horror series of the past twenty years should have its own roleplaying game. Published in 2002 by Eden Games, the Buffy the Vampire Slayer Roleplaying Game allowed players to live out their own experiences in the Buffy universe.

The game was relatively short-lived, encompassing only six books and ending with the loss of the license in 2005. Even with this said, the game provided very detailed mechanics for dealing with the horrors available in the Buffy universe.

It’s one of the few horror-based RPGs that puts a great deal of power in the hands of players, even if they aren’t supernaturally gifted.

When it comes to true cosmic horror, you can’t go wrong with the original. Call of Cthulhu is probably the best-known horror roleplaying game, and with good reason. After decades of publication and several revisions, it remains the byword in the genre. The game itself features a percentile-based dice system and a unique setting, one in which players are cast in the role of entirely mundane people who must deal with the horrors of a Lovecraftian universe. It’s an incredibly entertaining setting, albeit one that is almost punishingly dark.

One of the best known parts of Call of Cthulhu is the Sanity stat. Given the nature of Lovecraft’s universe, it’s almost impossible for a regular person to deal with the ramifications of what goes on in a game play setting while keeping their sanity. As such, player characters must keep track of just how mad they are going while dealing with a given play session. It’s entirely possible for a character to go completely mad and end their first session in an asylum – and this is often considered to be the good outcome for a game. This is a game where it’s not just assumed that most characters won’t survive, but where the lucky characters are those who make it away with a sliver of their sanity intact. 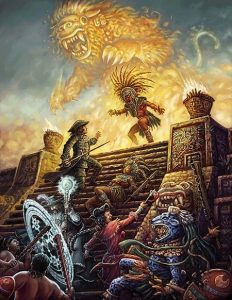 Most of the horror games that have made a huge mark on the genre take place in a version of the modern world. Witch Hunter: The Invisible World takes things back to the past, when the horrors we now consider to be nothing more than fables seemed a little more real.

It casts players in the role of Witch Hunters, men and women who decided to leave behind their regular lives and take up the sword against the forces of evil. The game took place in an alternate seventeenth century, one where all the horrors of the past were terribly tangible.

One of the best parts of the game was the setting. If you’re a student of history, you can probably recognize that a great deal of the points of divergent have nothing to do with horror. The Aztec Empire still stands, and the Dutch still own New Amsterdam. Women are in key positions of power not because of anything magical, but because of a much more deadly Black Plague.

Heroes get to play around in a vastly different historical sandbox while still facing off against horrifying evils. This is one of the few games in the genre in which the enemy is explicitly Satanic in nature.

Monsters and Other Childish Things

Most horror games put players in the role of someone with at least some kind of power. Even if they aren’t able to go toe-to-toe with the cosmic horrors of the setting, players can at least rest easily knowing that their characters can deal with mundane life. This isn’t hte case in Monsters and Other Childish Things, though – players are taken down to the basics. Instead of playing competent adults, players are cast in the role of children. Their challenges are the challenges of childhood, problems and quests that are made far more problematic by the presence of the monsters in the setting.

The other major change from the standard horror setting is the monsters. Usually, monsters are foes to be overcome – usually in a fairly bloody manner. In this game, though, monsters are capricious allies. Monsters are bonded to children and they love them dearly. Unfortunately, though, the monsters don’t always listen to their companions. This means that a great deal of the conflict in the game can be self-inflicted, especially when you combine the directives of a child with the mind of a monster. It’s a really great experience for those who want to role play something that is truly different.

Ravenloft was the first experience for many players when it came to horror role playing. It is one of the most venerable settings in Dungeons and Dragons, one that has faded in and out of prominence during the game’s publishing history. Ravenloft eschews most of the usual D&D tropes for something rooted a bit more in gothic horror, placing players in the realms of various evil lords and having them deal with worlds that can often seem straight out of a Universal horror film. It’s one of the most unique takes on D&D and a testament to how the system can be adapted to fit almost any genre.

In Ravenloft, players adventure through the various domains that compromise the Demiplane of Dread. In this plane, each domain is ruled over by a nearly all-powerful Darklord who shapes the domain to his whim. This is perhaps the first D&D setting where a player’s morality was more than just flavor. If a player committed dark or evil actions, he or she risked falling under the sway of the Dark Powers who ruled over the setting. In time, even the most noble of players could find himself or herself transformed into a figure of villainy. It was one of the most striking adaptations of the Dungeons and Dragons universe ever published.

There’s probably a rule in the role playing universe that states that if an idea exists, it’s been adapted to GURPS. Given the fact that there are so many other horror role playing games out there, it should come as no surprise that there is also a GURPS Horror setting.

GURPS Horror is less a setting and more a collection of rules for putting together horror games. It includes rules for how to frighten characters, how to create monsters, and how to make characters that make sense in a horror setting.

The second edition of the game helped to flesh out the potential worlds a bit and provided information for those who wanted to play in different historical periods.

There are horror games out there for anyone who really wants to experience a bit of terror at the tabletop. Whether you are looking to take out the legions of undead or to put your wits to the test against cosmic horrors, these games will provide you with what you need.

Tabletop games are particularly well-suited to horror because they take place in the imagination. If these games prove anything, it’s the fact that your mind is better at coming up with horrors than anything that could ever be put on the screen. Level up by checking out our gaming forum for more gamer goodness.