You are here: LitRPG Reads / Blog / Pros and Cons of Greyhawk Initiative
Spread the love 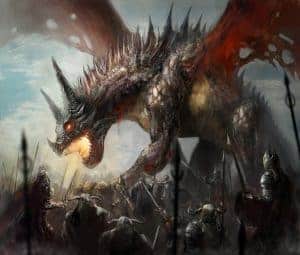 Dungeons and Dragons is a game that has changed dramatically over the years. If you are a Fifth Edition player who went back to one of Gygax’s play tests, it’d be fairly hard for you to keep up. What few players understand, though, is that every change in the way the game has played has been hard fought.

When change comes to Dungeons and Dragons, it’s usually speaking. Look at the change from Second Edition to Third, or Third to Fourth. Major systems get overhauls and players tend to get angry. The D&D community has split dozens of times over seemingly minor rule changes, with players tending to stick by their choices.

In 2017, a new rule change was proposed. The so-called Greyhawk Initiative System would change the way that combat order works in Dungeons and Dragons. While this might seem like a minor change on the outside, it’s something that might fundamentally change the way that one of D&D’s core systems works.

Future players must not only consider the changes that this system makes in the game, but both the pros and cons of adopting this radically different system for initiative.

Compared to the traditional system of initiative, the Greyhawk Initiative system is actually quite complex. It is, however, built on something that players already understand – the concept of rounds.

Combat is measured in rounds rather than turns in this system. For the most part, things stay the same – except effects expire at the end of rounds, rather than on a player’s turn. It’s a fairly minor change for most, but it could have far-ranging effects for some players.

Under the new system, initiative will be re-determined every round. Players and foes alike will all use initiative dice – dice that will all vary by character. Some players will have multiple dice, while others might only have a single dice. This will lead to a variable combat order that changes with each round of play.

Under the system, initiative will also change so that the lowest number goes first. Taken as a whole, it will theoretically change how combat works so that a relatively stable patterns of operations happens during each combat round. Some actions will be more likely to happen earlier than others, helping to make combat more cinematic and to help combat make a bit more sense.

Initiative is one of the oldest systems in Dungeons and Dragons. There are a few different ways to determine exactly who goes first in any given fight, of course, but there’s never really been any work done to change exactly how initiative works. As almost everything else in the game has changed by at least a little bit, it’s only natural that people should be looking at what needs to be done to help initiative make sense.

One of the biggest reasons why this initiative change makes sense can be found around most gaming tables. Look around as you go through combat – which players are actually actively involved? If your group is like most, it’s probably whoever is up soon in the turn order. Otherwise, players have a disappointing tendency to space out. They take a move, plan out what they are going to do next, and then most of them go off into their own heads. Even worse, you’ll get the tables where players start playing around on their phones and have to be forcefully brought back to the table.

Under the new system, everything’s a bit more dramatic. Is it more complex? Sure. But it also makes players pay attention. Under Greyhawk Initiative, things change constantly. That means much more thinking on one’s feet and much more involving combat. Will it be harder to run? Sure. But all in all, it should make for a better experience for the players.

At the same time, the initiative change will help to make combat more tactical. Players won’t just think a round ahead – they’ll have to come up with strategies that will help them even if they don’t get turns on their planned moment. It’s not always going to be a very smooth transition, of course, but it’s going to be one that will make players better at the combat aspect of the game.

Finally, it can be argued that the initiative system is something that has held back Dungeons and Dragons. At its heart, you still have a game that’s drawing off on an old war gaming concept. If players are given a real chance to experiment with how combat works, you might see that other systems can be altered in a way that makes game play more dynamic. This isn’t to say that everything needs to be changed at once, but it could be interesting to see what will be discovered under a new initiative system.

As good as the arguments are for changing up the initiative rules, there’s also a few good reasons to avoid making any kind of change. There’s absolutely a controversy here, especially if you understand how most players engage with Dungeons and Dragons.

Let’s get the most obvious problem out of the way quickly – there’s not a real problem with the current initiative system. It’s managed to survive for decades without turning anyone off, so there’s got to be something right with it. In fact, dozens of other game systems have more or less copied the initiative system pioneered by Dungeons and Dragons. It’s one of those fundamental parts of the gaming world that really doesn’t need to be altered. There’s not a lot to be gained here.

There’s also the argument of splitting the community. The tabletop gaming community is absolutely fractured at this point, with each new game further driving apart groups of players. This isn’t a growing genre, either – it’s not like most new games bring in new people. If you change up the way that initiative works, you’ll eventually find yourself dealing with groups who split up because of the choice of rules being used. That’s going to make it harder to find games, harder to build communities, and ultimately harder for tabletop games to keep competing in a market that’s hard enough on them as it is.

Finally, and perhaps most important, changing the initiative rules is going to make Dungeons and Dragons more complicated. There are already more systems at play than most players can handle. Imagine what’s going to happen when players suddenly have to deal with a more complex initiative system! Combat, which often takes far too long with inexperienced groups, will quickly become a chore rather than a highlight of some sessions. It won’t take much for players to start moving towards other games that bring back at least one element of simplicity.

With those arguments in mind, it becomes more difficult to make an argument for changing up the system that is already in place. For most, it might seem like change simply for the sake of change. If you think that Dungeons and Dragons players are always happy with that, you just need to look at the circumstances that led to the creation of Pathfinder.

The Greyhawk Initiative change is out there, even if it isn’t an official part of the rules. As long as players have access to it, there will be games that make use of the system. Some players are going to love this, while other players are going to run away from it as quickly as possible. For the time being, though, this change is going to be limited to a very small group of players.

This introduction does raise several questions for the future of Dungeons and Dragons, though. It might be time to start questioning more of the systems that are a legacy of the original game. There’s been so much that has changed over the years that it’s probably time to start getting rid of some of those sacred cows.

At its heart, this is a question of whether Dungeons and Dragons should continue to evolve or if it should simply continue to be refined. There will never be a right answer, of course, and new editions are going to be published as long as Wizards of the Coast continues to make money off the franchise.

The future is here, but it will ultimately be up to the players to determine the shape that it takes.

History of the d20 RPG System

How to Create Interesting RPG Characters with AI