If you’re an RPG enthusiast, you’ve probably encountered the products of Steve Jackson Games. While you might be very familiar with GURPS, you’d have to be pretty old school to remember another one of its early products.

From early 1980s came Car Wars, a game of strategy and automotive combat. A natural descendant of war games and a precursor to many tactical RPGs, this game is one of the true classics of the roleplaying and strategy game worlds. 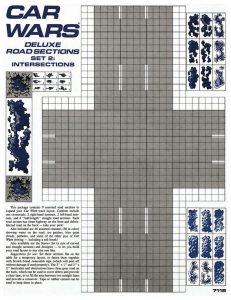 This game was the genre-defining entry for car games in the tabletop games scene. It took some of the same mechanics that made other war games popular and adapted them to that most American of products, the car.

The fiction of the game puts players about fifty years in the future, after a nuclear war and a second Civil War. Players take the role of auto-duel drivers, players in a popular death sport in the far future.

One of the most interesting parts of the game is that it allowed players to keep roleplaying the same character even after death. Characters could have their memories uploaded so that death would only be a bump in the road.

Like most classic games from its era, this game was fairly simple upon release. Players would use card-stock counters to represent their vehicles and played on a pre-printed map.

The early maps had several basic scenarios and players were largely left to their own devices. Many increased the scale so they could use miniatures and toy cars to better simulate the feel of the battles.

The tactical draw of the game made it one of the most popular car games ever made. While it might not see quite as much play as in the past, it was still a gateway to other war games for many players.

Like many other classic games from the 1980s, the game had a fairly rich world. That led many people to want to roleplay in the game. Given the status of Steve Jackson games, it’s only natural that a roleplaying game would be released.

The game was adapted for GURPS rules as GURPS Autoduel, which would go on to have a fairly successful run of its own. It took most of the concepts of the base game and adapted it in a manner that emphasized the setting and roleplay aspects.

Eventually, Steve Jackson would release yet another iteration of the product in 2002. While gamers were ready for the release, they weren’t quite ready for how it would be handled.

Instead of releasing a single product, like most tabletop games tended to do, Car Wars 5.0 was released across multiple products. If you bought everything, you’d have too many redundant pieces and cards – enough to turn off most consumers.

Eventually, the game would get a Kickstarter for a Sixth Edition, but by this point it might be too little, too late for the franchise.

What’s the legacy of this game? A great deal of it can be found in video games. You can see it in games like Twisted Metal and Carmaggedon.

You can also thank it for many movies. It even predates the Mad Max franchise by a few years. The concept of cars as death machines probably owes a great deal to this game.

More than anything, though, the legacy lives on in other RPGs. The game helped to popularize using common items as game miniatures as well as the adaption of tactical games into the roleplaying space.

Track down a copy of Car Wars if you can. It’s worth playing, if only for the history. And if you want to discuss this classic game with others, head on over to the LitRPG Forum!