We have another interview with an audiobook narrator. Scott Bennett does more than LitRPG, but we still wanted to pick his brain for our readers. ​Husband, father, middle school teacher, scooter enthusiast (Vespa), Air Force veteran, book nerd, and…Audible Approved Audiobook narrator, we’re thankful he took the time to interview with us. 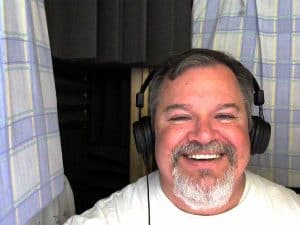 Can you tell us a little about yourself?

I grew up in Nashville, TN back when kids my age played with Evel Knievel toys, rode banana seat bikes over rickety ramps, watched Monty Python and Goodie’s on TV, played lots of board games (Risk, Axis and Allies, and B-17 Queen of the Skies among my favorites), listened to a lot of vinyl (Kansas, Styx, Queen and ELO topping my mix lists), got involved in football, drama, chess club and forensics (not the CSI kind – but speaking competitions) and went into the Air Force where I was a Spanish translator. I got married and had a couple kids, spent a while as a minister (no kidding) then became a school teacher. Been doing that for a while now (Middle School – and I have the scars to prove it).

How long have you been narrating audiobooks?

I’ve been recording audiobooks for about 3 ½ years now. I have just a hair over 180 books (various genres from westerns, romance, crime, pulp fiction, and horror to fantasy, sci-fi and LitRPG). I have eclectic tastes in reading; what can I say? haha

When did you first learn about LitRPG?

I started seeing LitRPG books a couple years ago and began auditioning. Did a few because I thought they looked interesting. Didn’t really know what I was getting into, but am glad I did.

As a reader and listener (constantly listening to other narrators’ stuff to see what I aspire to be like) I find LitRPG and GameLit books to be full of action, adventure, suspense, and endless possibilities. Furthermore, when it comes to narrating them, there are a range of cool characters that are so stinking fun to voice – I get to try out a lot of different accents, etc. Last but not least, I love the fans of LitRPG. They really seem to have an appetite for audiobooks and that’s great! I’ve been very fortunate to have some great selling audiobooks in romance (stop chuckling please) and fantasy, but not all of the books I’ve narrated have gotten as much love. But just about every LitRPG book I’ve been privileged to narrate gets a lot of love in terms of downloads.

What’s your favorite narration that you’ve done so far?

Wow, I’ve done so many that I really, really like! If pushed into a corner or had my arm twisted, I could probably narrow it down to two books (or actually a series and a book): The Sorcerer’s Saga series – currently with six books – by Rain Oxford is a delightful fantasy series about a young man born into a family of sorcerers who ends up having light and dark magic. He has some wonderful and wacky adventures – well worth checking out. We just bundled the first three books in the series. Three books for the price of one credit – really worth a listen (hint hint). The other is a book called Tourists of the Apocalypse by C.F. Waller. It’s a mash-up of time travel, thriller, and post-apocalyptic stories with a killer twist. I’ve enjoyed all the LitRPG books I’ve narrated but am partial to Blademage Beastmaster by Deck Davis and Slayer by Darren Hultberg, Jr.

Share a photo of your workspace and/or describe it? 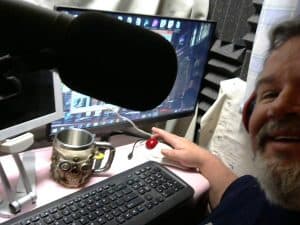 I’ve attached a couple photos. I have an isolation booth built by my brother-in-law fully stocked with bass traps, accoustic panels and sound absorption materials. I record on a windows PC with an Audiotechnica 2035 mic and sometimes I swap out with a Shure microphone. I read copy from my iPad. I use a Focusrite interface. (This is probably more info that you wanted here – sorry)

What do you think about the future of VR / AI?

I think we’re just beginning to scratch the surface with what we’re capable of with virtual reality. I can easily envision some of the things we see in LitRPG becoming a reality in the not-so-distant future. As far as artificial intelligence goes, this gets a little spooky to me with the possibilities. (Is that the theme from Twilight Zone I hear in my head? haha)

Do you personally read or listen to books more often?

I honestly do a lot of both. I’m probably one of a minority who likes to use whispersync on nearly all the books I read for pleasure. I’ll get both e-book and audio and follow along with the text as I listen…but not when driving. The money I spend on KU is well spent between my wife and me. We have three kindle fires that we keep full at all times. Admittedly, she reads at least three times as much as me (because most of my free time is spent producing audio).

Any favorite authors from any genre?

Lots of favorite authors, but let me just say that any time Stephen King or Lee Child publish a new one, I’m going to pre-order. It’s automatic. And I’d throw Jake Bible into this discussion, I’ve narrated a couple books for him, but I read a lot of the other books he writes because I love his characters and dialogue.

Advice for authors wanting to create an audiobook? 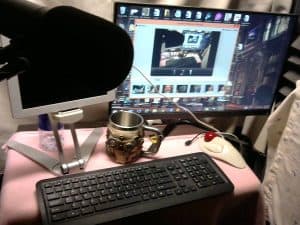 Pick me! Haha All kidding aside, I would say develop a good relationship with your narrator. Communicate often. Give him/her a list of special pronunciations, voices, ideas on how you want characters to talk (fast, slow, accents, etc.) Also, if you’re doing a series, give them advance memos about what to expect in future books. For example, if you know certain characters are going to be returning in the next book, let them know so they can save voice samples in a separate file – things like that. Also, a brief synopsis or outline I imagine would be very helpful.

What can we expect from you next?

I’m in the preparation stage for two LitRPG books – both are book #2 in their series: Blademage Dragontamer by Deck Davis and Blade Guardian by Darren Hultberg, Jr.

Thanks for letting me talk about my dream job. While I enjoy teaching, I have found that getting to narrate audiobooks is way more than a hobby. I really look forward to coming home at the end of the school day and getting to read books and actually make money doing it. To the authors out there – thank you for writing. My hats off to you. I wish I could do what you do. Keep using your imagination to take us readers and listeners on such marvelous adventures.

Feel welcome to check out (and like) my Facebook page to keep up with my works in progress and new releases:

LitRPG: My Journey From Adult to PG

What the Heck is the LitRPG Forum?
You are a gamer trapped in an RPG? Can you survive, solve the mystery, and escape? Get more info! ;