We’re back with our second author interview. If you missed the first one, you can still check out our interview with William D Arand. For our second, we have another popular LitRPG author – Daniel Schinhofen. You might know him from Alpha World or his new Apocalypse Gates novel.

Daniel was kind enough to answer some questions about his life as a writer in the 21st century. We hope you enjoy reading it as much as we did putting it together. If you have ideas for future interviews, be sure to stop by the LitRPG Forum and let us know who you’d like us to interview. 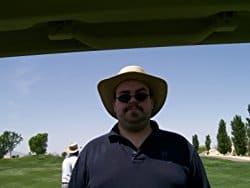 I first started writing back when I was about 8-ish. It was after reading the first Lord of the Rings books. I’m almost positive that manuscript all twenty pages of it doesn’t exist anywhere. If you mean when I first start writing with the intent to actually let other people enjoy it.

It was shortly after 2016 started, let’s say February of that year. That is when the first few lines of Last Horizon: Beta were typed.

Mostly Fantasy, with a bit of sci-fi for most of my life. Since i was introduced to LITRPG/Gamelit though I’ve read mostly just it.

What was the deal with two versions of your last book?

It was an experiment. I don’t mind adult sections in books when I read. When I wrote Last Horizon and Alpha World though i went fade to black, to make it friendlier to people. When i got complaints about sex in my books I was taken a back. I realized I was censoring myself and thought about it for a bit. I decided to put up two versions to see what others wanted sterilized or dirty. Funnily enough the Author’s Cut out selles the PG-16 version by about a 30-to-1 ratio.

What is writer’s block? I don’t normally have to deal with it. When it does happen i go back and reread the last few chapters then start writing again.

I have the roughest idea of what i want from the series to begin with, starting and end wise. Then I start writing and let the story show me what it wants.

That is like picking a favorite child. Last Horizon is special to me because it is written about my friends. Alpha World is special as it tells a story of a man I can see a friend of mine becoming if the events of Kaylee happened. Apocalypse Gates is special as it is the story i have had the most fun writing, no longer censoring myself was liberating.

NOPE. I would have to sterilize the work space first to remove all incriminating evidence and that is way more work then I’m up for.

Who are some of your favorite authors?

Zelazny, Pratchett, Asprin, Ringo, Spider Robinson, Conroe, Butcher, MSE, Blaise, Arand, Eden, Futch, and the list goes on and on. It would take me forever to list them all.

What can fans expect next from you?

Alpha World 4 is currently with the editor. After that should be AW5 and then AG2.

Inside my head. I’ve got so many things in there that want out. Most of my stories begin with a simple thought of, ‘What if…’

If you were trapped on a distant planet all by yourself, what are six things you’d have to bring – and why?

If you had to change your name, what would your new name be, and why would you choose that name?

Daniel Schinhofen, because it’s mine and no one said I couldn’t change it to the same name.

Just a massive thank you to the people who enjoy my books. Seriously, you guys make me shake my head in shock. when i wrote Last Horizon: Beta, my only goal was for 1 person to like it as much as I enjoyed writing it. Anything more then that would be a success. To my absolute shock people liked it, people bought it and told me they liked it. Some of those same people have read everything I’ve written, which boggles my mind. Every time I feel a little off I consider that people are enjoying my stories, and it makes me smile and get right back to writing.

There you have it – words from the man himself. We hope you enjoyed our author interview with Daniel Schinhofen. Be sure to bookmark the site and check back for future author interviews, litrpg news, reviews, and much more. You can also catch DJ Schinhofen over at the LitRPG Forum. Come join us.