Conor Kostick is a writer and historian living in Dublin. As a novelist he was awarded the Farmleigh writer’s residency for the summer of 2010 and a place on the nominees list for the Astrid Lindgren Memorial Award 2012 and 2013. At their 2009 awards, the Reading Association of Ireland gave him the Special Merit Award ‘in recognition of his significant contribution to writing for children in Ireland’. Epic is Conor’s most successful book, selling over 100,000 copies worldwide. It was awarded a place on the International Board on Books for Young People “White Ravens” list for 2006 and on the Booklist Best Fantasy Books for Youth list for 2007.

I actually started about the age of twelve. But I gave up, partly because I was discouraged that my stories were obvious copies of books I’d been reading but also because I kept it secret from my friends. Mine was not the kind of school where you said you wanted to be a writer. Better to claim you wanted to be a rock star or football star.

What was your first published novel?

Epic came out in Ireland in 2004 and the US in 2007. My first and easily my most successful to date.

I used to read fairly narrowly in SciFi and Fantasy. But around ten years ago I began to teach a ‘Finish Your Novel’ course at the Irish Writers Centre and to help those working in other genres and none, I read widely. Romance; Thrillers; Historical; etc. And what I found was that I enjoyed the best in those genres too. Now I still tend to favour SciFi but will pick up anything.

When I’m able – and I often am not with three kids and no end of freelance editing and copywriting – I’d write three to four hours a day.

I write my way out of it. If I’m stuck, I’ll keep going all the same, knowing I might have to lose the new scenes. But usually, there comes a breakthrough after a while and I’m off again. I find long walks great for turning over plot concerns and also the moment just before you fall asleep. I used to have a notebook by my bedside when writing Epic because a lot of good ideas came to me in that not-quite-awake state.

Pantser, definitely. I always have a goal though, a particular scene I’m aiming for. Typically, I’ll have about five or six key moments in mind but no idea how I’m going to get to them.

Saga has my favourite character (Ghost) and it’s a strangely inspiring experience writing in the mind of someone braver, more determined and more quick witted than yourself! But overall, Epic. 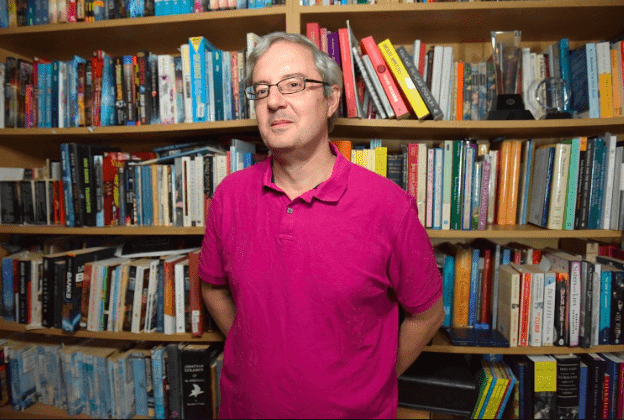 Attached. It comes from a Sunday Times feature, but you have to log in to read it.

Often from reading. For Epic it came from reading a newspaper article that said the virtual economy was worth more than the GDP of Bulgaria. And that immediately made me wonder what it would be like to live in a world where all your earnings came from a MMORPG. For Move it was reading that a solution to the problems of quantum mechanics would be to assume a multiverse. Again, it struck me that being able to see these nearby universes would be amazing. Even better if you could move across into them.

Burst of creativity. Slower haul. Edit. Get distracted by chores. Sit down and repeat.

If you were trapped in a video game for the rest of eternity, what game would you like it to be?

Hah, that already happened to me. Or at least it felt like it. Everquest was not called Evercrack without reason.

Keep writing and take your reward from the pleasure of the process and the enthusiasm of those who enjoy your stories rather than the market.

My first Everquest subscription. If I hadn’t experienced what was then the leading MMORPG, I wouldn’t have been able to write Epic.

The latter, except that it’s me I’m writing for. I want to write the kind of book I’d love to read. I don’t try to second guess the market, I’d find that would take away the pleasure of writing.

A fantasy set in Roman times, except that magic works and there are still dragons.

Just that I really like this community. I think that people who are proprietorial about LitRPG are being driven by avarice rather than the more human desire to tell stories that entertain. It’s far better to share and encourage sharing than to try and build a wall around a genre and say, ‘this is all mine’.