A Brit living in Canada, Michael Chatfield is the author of the Free Fleet and Harmony War military based space opera series. After getting thoroughly hooked by science fiction and LitRPG, Michael turned his hand to writing in his favorite genres. Michael draws on his time spent as an Infanteer in the Canadian Military to bring a realism to his stories.

I’ve been tinkering for a while, but I think it was really 4 years ago I started. Just one of those, well lets give it a shot. Thus the roller coaster began 🙂

I’ve read science fiction, to fantasy, back again, Eastern styled books, manga here and there even some historical and straight military. I really love to have paperbacks, but I don’t usually stay in one spot for long so ebooks and online books are a must!

Last Stand of the Legion: Rift part of the blood war series. It’s gripping, the actions of the characters are realistic, the writer gets military science fiction. Not only did he serve but he’s been with EMS and dealt with suffering and the nasty underbelly of life. From a technical aspect, the way he transitions from one character to another, from ground to space combat and makes it immersive. Space battles are like old fashioned water based navies, fire everything, then turn around as fast as possible to hit them again. He brought that alive to me and it’s not clean fighting on the ground. It never is. He showed the realities of your plan just going flying on out of the window and you have to depend on the men and women around you. Very impressive work and one of the few series I’ve re-read.

The one that’s going to happen next. You get to start off on a new adventure with a new group of people!

But if I was forced to, From the black, book 4 of the Free Fleet Series. We see the characters broken down again, we get to see their emotions and their feelings behind it. This ragtag bunch of gamers and people hijacked from Earth now somehow forced to stand up against a hidden enemy. They’ve been pushed past the limit and they keep on giving. Damn those characters were something else.

The Gam3 I love litRPG and I love science fiction. I would just be amazed to see the scale, the beauty of a place as big and well developed as the gam3 universe. And Yes I do spend hours looking at landscape art… Only a minor addiction… it’s research I swear!

In the past I would have said no, and I still would to a certain extent. I think that you can be emotionally out of whack with your work. Take the Harmony War Series, after that being in a really dark place with the characters I needed to take a break and I read litRPG and started to write the Emerilia series. Now after the Emerilia Series I knew that I had to finish of the story with the Victors and the cast from the Harmony War Series. It took some time before I was able to get back into the mindset of the characters (something that Dawn Chapman my cowriter helped me with a lot). Once I was in then it again took some time changing mindsets back to the ten realms series.

I will say this, writers block is only as bad as you let it be. Sit down and do the time, start typing and you’d be surprised how much you can write.

I am a big panster in a lot of ways, but with the ten realms I have become more outline focused. With the game stats and the paths of crafting, dungeons, towns, cities and realms, I have post-its littering my desk.

In most of the fight scenes, sudden encounters, initiative, yeah that’s all on the dice. It makes it faster to write a scene, understand it and for some reason Rugrat loves rolling 1’s all over the damn place!! I think with LitRPG everyone has to be a bit of an outliner to some extent. I can’t remember what my stat screen is from Skyrim.

First I think of a scenario, then the characters, build them out, see what their like how they act. What their motivations are, then just see where it goes from there. At the beginning of the book I have an end point in mind, but events can sometimes appear randomly or be generated from the very beginning.
I simply try to get from one event to another and wade through the chaos the characters have likely made for me.

Dependent on the day, distractions are everywhere and leaving the house can occasionally happen. I like to aim for 6-8 hours per day, sometimes I get more, sometimes less. 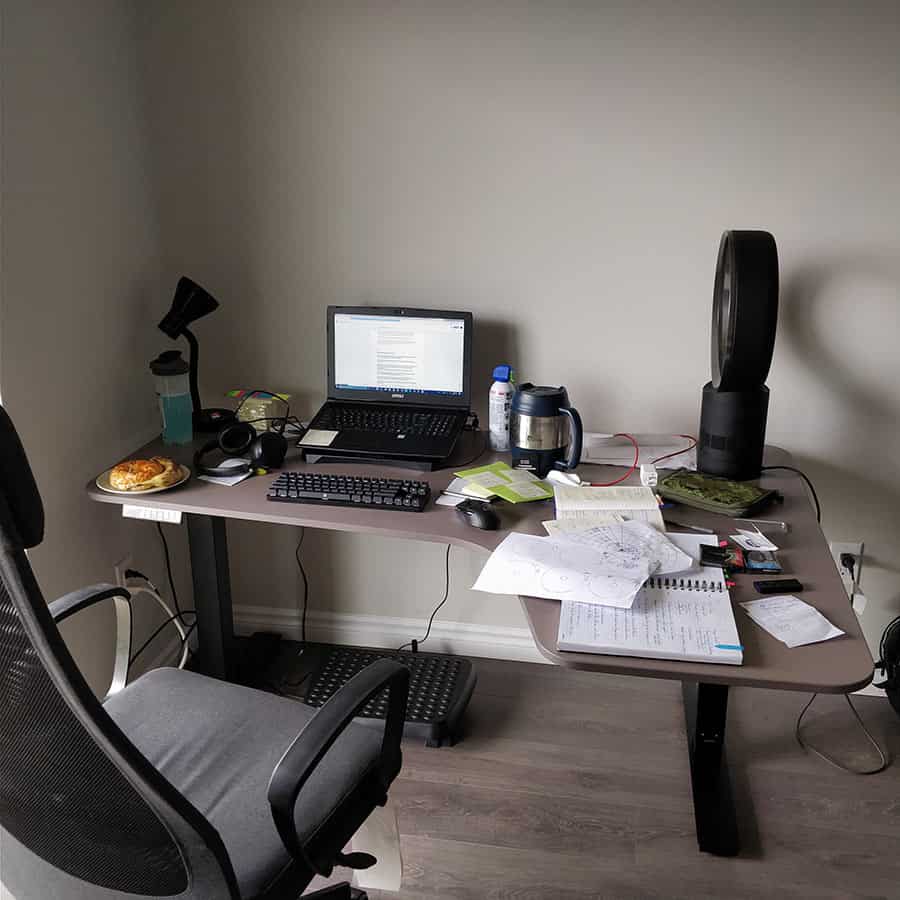 This is currently one of the only pieces of furniture in my entire apartment, this and my bed and I probably spend more time here. Post-its are my friend and I love them dearly. Never forget a planner for those release dates, or drawings for bases and massive notepads to try and figure out battles and events on.

In all honesty my work space will probably be updated before I even get a couch. PC gaming ftw!

John Ringo, I liked his expansive worlds and the crazy damned ideas he came up with.

David Weber, in just a paragraph he can not only introduce a character but bring them to life. His characters always felt very real to me.

Jim Butcher, The spin he put on his books, the way they would pull you in and take you hostage, I spent 3 days only stopping to watch a movie and sleep (I was reading all the way up to entering the theater and started reading again on the steps of the theater).

Books, movies, videogames, art, music, it’s all kind of jumbled up in there, then one day when I’m usually trying to avoid writing or waking up with enough caffeine to level a horse I’ll think of a scene, or how I would like to do something differently. I’ll laugh it off, go on about my day and lie to myself telling me the idea will go away and that I will be perfectly fine not listening to the voices in my head.

Well they win most of the damn time so I can’t let the idea go and then scenario, characters, okay it’s time I put pen to paper and did something about the current madhouse of characters in my brain.

One of the sayings that I keep repeating is this. Ideas are like gravel in the driveway, you have to drive over them a few times and test them out under the pressure to see which one turns up a diamond, a true blue story idea. There are many ideas, but few that can start a story. I’m not sure who said it, but it’s stuck with me a while.

Also, don’t go looking for new story ideas while you’re working on something, unless you can do multiple books at once. Otherwise you’re going to start being annoyed with what you’re writing and try to get onto that next cool story.

What is your first video game memory?

Probably tonka trucks on the computer. You’d go around leveling some ground and then making a road all over it. Kind of strange game now I think of it.

Last video game you played? How did it go?

Orcs must die, about five minutes ago. Pretty good, got 5 stars some loot chests and I’m working on my arrow walls. It’s a good fun little game, but man it took me some time before I could find a character that fit my play style! Apparently running right in without knowing how to link your skills together isn’t the best idea for a tank?? Yeah…

Currently releasing the Emerilia Series on all major ebook sellers! The first audiobook from the Harmony War Series (Sacremon) is up for preorder on audible and will be coming out next month with the rest of the audiobooks following behind shortly. I am hoping to have the Second Realm (A ten realms tale) and The Tenth Awakens (Maraukian War) out before or while Dragon Con is going on!

If you like a book, please review it, it lets other readers and the writer know what you did or didn’t like about the book. This genre is nearly all self published authors at this point. Your reviews really do count! Also helps us the writers know where to improve so we can bring you a better book!

Stay classy, keep them keyboards clean and I hope everyone finds a book they like and can escape into.