Our next author interview is with Matthew Siege. You might know him from his zombie LitRPG series – Headshot. Siege considers himself a father, writer, and a gamer – not always in that order. Sit back and enjoy listening to another writer share a bit of their world with us.

In the summer before kindergarten I was in some sort of put-your-kids-here-so-you-can-go-to-work thing during the day. We were going to perform a little play for the parents at the end of it, and I managed to talk the people running it into letting me write the script. I can vividly remember sitting down with my Mom at the dining room table for the next few nights as I dictated a crazy story about a bunch of tigers in the midst of some no-doubt earthshattering tiger dilemma.

The details of the plot escape me. I’m sure it was a clichéd dogpile of nonsense, but that didn’t stop me. I’ve been in love with the thrill of making “something” out of “nothing” ever since, and no other profession ever truly interested me.

I’ll read anything, since I feel like it’s all got something to teach me. I’m as interested in what the author does right as what they don’t, and a historical detail in a biography or unique turn of phrase in a book about World War I is worth the price of admission.

But Fantasy, Science Fiction and Horror are my go to genres. My heart has always been fondest of stories about things that can’t, haven’t or shouldn’t really happen.

Writer’s block is a luxury I can no longer afford. Nowadays I trust that when the words aren’t showing up to play it’s a sign that something’s wrong; the previous scene was clunky or the plot’s become overly confused. Once I address it I can head back down to the word mines and keep on keeping on.

I outlining from beginning to end and then glance at it less and less as the story evolves and the characters take over. By the time I’m done, the end I had imagined is pretty much vapor and the truth of the thing I’m writing has shown itself.

On days when the kids are out of the house, I’ll write between six and eight hours. The rest of the time I steal two or three hours once everyone else is asleep. Aside from that, I’ve gotten pretty damn good at editing with Elmo or Paw Patrol prattling on in the background…

At the moment, my personal favorite is the second installment of the Headshot series, Two in the Head. My most recent book is always the one I like the best because A) if it weren’t I wouldn’t have been able to trick myself into writing it and B) it’s finished, so I can feel like a contributing member of society for a little while. 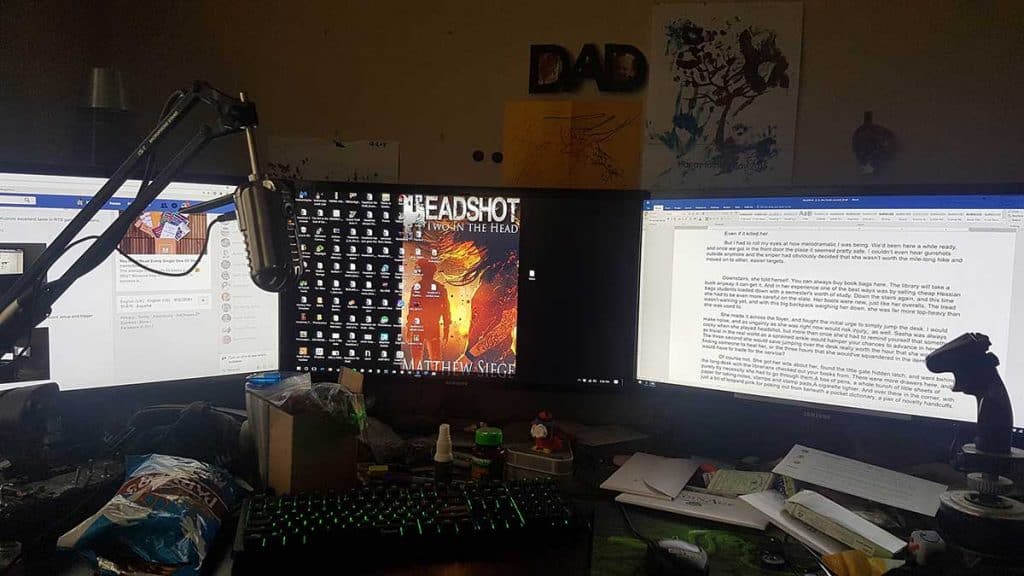 Two unrelated thoughts gathered during a lifetime of spending too much time inside my own head + lightning. I get a lot of useable stuff, but I have to sit with it a while before I find something that I want to explore. If I can guess the end, or if it feels like I’ve seen it before, I let it go. If I can’t get it out of my head, I don’t have a choice.

The stories I write are the ones that won’t die quietly.

I think I’d go with time travel. I’d love to be able to replay a situation a few different times, making new choices and watching their ramifications ripple out before going back and trying something else. A Groundhog Day scenario might eventually become a nightmare not worth living, but I’d have a lot of fun along the way until it did.

Besides, I’m really starting to realize that the most important commodity is time. You can’t buy more of it, and once it’s gone there’s no getting it back.

Don’t glorify the process. Writing is hard, and good writing is even harder.

The worst thing about being an author is that everyone thinks they can already do it. That stuff they learned in English class? That’s not the same as what we’re going for, here. Be prepared for a lot of bad advice from people who haven’t bled enough words on to a keyboard to know what they’re talking about.

The truth is, you need to be willing to write a lot of crap before you get to the stuff inside of you that’s worth a damn. It’s a purge. Own it. Let yourself write shit. Most of us have spent far too long on a steady IV drip of bad dialogue, cheesy miscommunications and easy endings. That stuff needs to be unlearned. It needs to exit the body in a violent, often painful manner.

And there’s nothing wrong with any of that.

And the real secret is this: even after you’ve written for decades, a willingness to let first drafts be terrible is incredibly freeing. Get the words down, and fix them on the second pass.

A lifetime subscription to brain.fm has helped me immensely. I can put on the headphones and let the background noise drown out the voices. Can’t recommend it enough.

I wouldn’t know how to give readers what they want even if I tried. Even if I could, I think giving readers exactly what they want sounds like you aren’t making your readers do any of the work. I like to write stories that make my audience take a side. If they aren’t kept guessing, if the end is obvious or the path to get there too simple, I worry that they’ll put the book down.

I’ve got an open-ended series of novellas coming out over the next few months called Gunslinger’s Code. It’s fully of craziness, and I’m using it as a playground to throw in a lot of the twisted ideas or fun interactions that don’t fit into some of the other worlds I’m living in. Essentially it’s a Wild West litRPG with cool rules for Players and NPCs combined with gunslingers, magic, steampunk, demons, and whatever else pops into my head along the way.

Writing it makes me giddy…

I’ve also got the last installment of the Headshot trilogy on the way, a new horror litRPG series screaming at me and a bigger, more ambitious thing that will probably take me a couple of years to write, on and off.

I’d like to thank all of the people who do the things I can’t or haven’t or won’t. People like yourself for running the litRPG Forum as well as all the other tireless men and women who write the books, read the books, review the books, blog about the books, and make and manage and moderate the Facebook pages that focus on the books.

Without those efforts, I wouldn’t have a place to play.