As first of a series of interviews with various authors, here’s one with William D. Arand. You might know him from the super-successful Super Sales on Super Heroes series or many of his other fine books.

You might even get some details about Super Sales on Super Heroes 3. Yes, it’s coming, and we’re as excited as you are about that news. Without any further ado, here’s our first interview with William D. Arand.

When did you start writing?

Somewhere in 2015. I had a friend who published a book. I read it and thought it was well written, but that I didn’t like his MC. Told him he was too much of a goody goody paladin.

His response was essentially, “Go write your own book.” but with alot more cursing involved.

Otherlife Dreams took me about 9 months to write while I figured out my process. There was actually a book I started to write before that that … died… while I learned out to write.

What do you find most enjoyable about being an author?

Interacting with fans who have theories or questions. It’s always exciting to see what they come up with and how close they are to the backstory. Or honestly, just talking to them. I make it a point to try and respond to everyone who reaches out to me. I don’t get them all, but I get close.

What book of yours do you personally love the most?

Otherlife Dreams. 🙂 It was my rookie attempt and the one I spent the longest on. There’s just something about that first book you write.

Will there be a third Super Sales on Super Heroes book? Details?

There sure will! Super Sales 3 will be about closing up the chapter on Skipper. She was intentionally an unresolved conflict. Book 3 will definitely involve more portals, more fights, and a very messy family reunion. Should be interesting. Or so I hope. We’ll see!

What do you draw from as inspiration for your books?

Random thoughts… really… just whatever pops into my head and feels right. I just… let it flow out and it becomes the story. I wish I had a better answer. 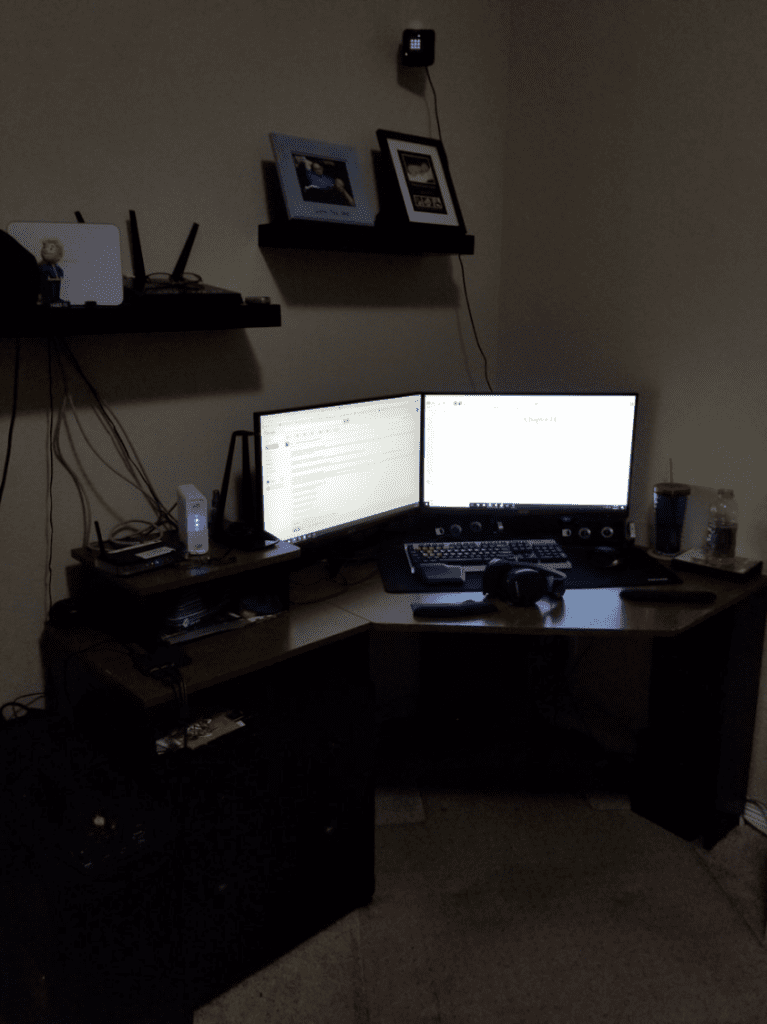 Where do you physically do most of your writing?

At my desk in my office! It’s where I game and write. See insane photo attached. I took it for this question so pardon the “lived in” feel.

Where/How do you get your best ideas?

Toilet thoughts. I wish I was kidding. My brain starts going off on weird strange tangents while using the restroom. A good example is Wild Wastes.

Originally that was a question of, “What if instead of Pokemon, it was monster girls?” and it kinda went from there. The original file name was “Porno’mon” when I was writing it.

Super Sales was being bored and opening my laptop up to a clicker game where you upgrade your stuff. Over and over. “What if this was real life?”

Favorite from a standpoint of they’re awesome? Blaise Corvin

Standpoint from I read their book recently and I’d read it again? Daniel Schinhofen.

Any advice for aspiring authors?

Sit down. Find the idea in your head. And write it out. Don’t go backwards and edit either. Keep pressing forward, keep moving onward.

If it’s your first time, you may end up burying the book like I did. That’s ok! You can always rewrite it another day.

When are you joining the LitRPG Forum? 😉

Do you ever deal with writers’ block?

Not… in the traditional sense. Writers’ block for me is figuring out where to go next which depending on what “next” is. If it’s a chapter, an hour or two. If it’s an arc, a day or two. If it’s an entire book, a week. I don’t usually procrastinate too much. I don’t have enough time!

Are you an outliner or a pantser?

Pantser in the worst way possible. I’ve been experimenting with twitch broadcasts because of that fact. It changes nothing in my writing style/plan since I don’t have one. 😀

What do you enjoy when you’re not writing?

Write. Write a book. It costs you $0.00 to put something up on Amazon. Even if you fail, and no one likes it, you still did it. You might even make a little bit of money off it. Or you could get drunk one night halfway through editing your own book and slam it onto amazon, only to remember two days later and find out you broke into the top 1,000 (yes, that’s exactly how Otherlife Dreams went down).

Other than that? Legion First.

There you have it – our first LitRPG Reads author interview with none other than William D. Arand. Stay tuned as we possibly get some more lined up. If you have any suggestions, stop by the LitRPG Forum and let us know. We’ll leave the torches on for ya.