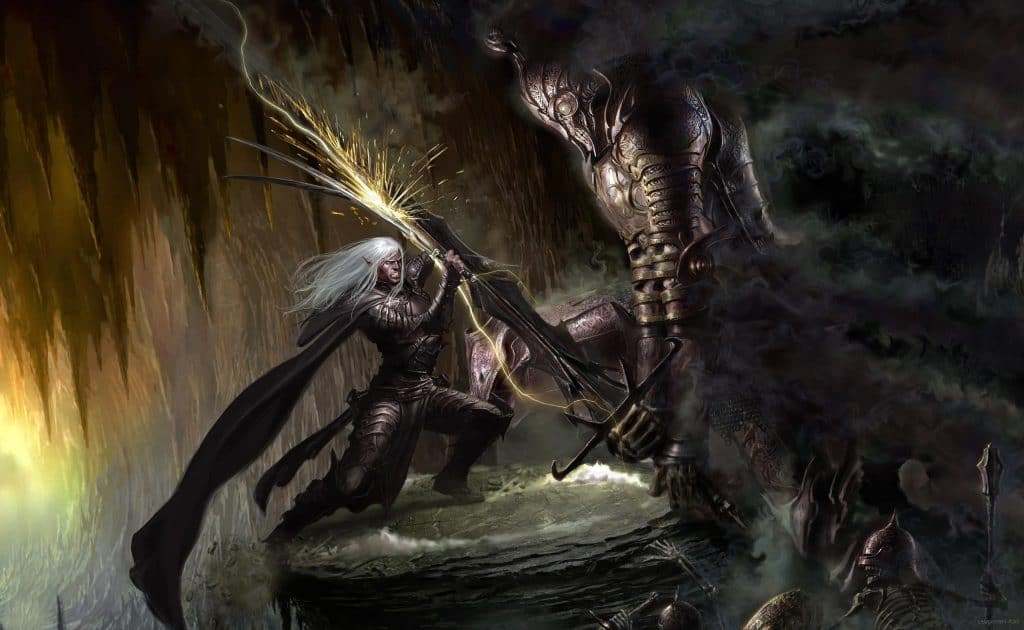 The legends of the RPG world aren’t just those who worked on the games themselves. In many cases, they are the individuals who fleshed out those worlds and made them come alive. R.A. Salvatore is certainly one of the best-known names in fantasy, especially among those who play role-playing games.

The author has managed to bring a certain definition to the Forgotten Realms through his creation of some of the setting’s most memorable characters. Working as an author and script-writer, he’s earned his title as a legend through a series of works that have already endured for decades – and that don’t seem to be fading away any time soon.

Salvatore was born in Massachusetts, the youngest of seven children. While he was interested in writing thanks to a high school English teacher, his interest in fantasy didn’t really begin until he read Tolkien in college. Once he read The Lord of the Rings, he switched his major over to journalism and graduated with a degree from Fitchburg State College and then later received a degree in English from the same college. His goal was to become a writer, something he had significantly more success in than most who choose that particular career path.

While it’s clear that Salvatore always intended to be a writer, it’s not a very easy field to break into. That’s why Salvatore supplemented his early writing career with work as a bouncer – something that he said helped him greatly when it comes to writing combat scenes. Unlike many of the other legends in the field, Salvatore has never really stepped away from writing fantasy works – he’s been working steadily since 1982, authoring over fifty novels in the course of over three decades. It’s definitely an impressive feat from a part-time bouncer.

If you know the name R.A. Salvatore, it’s probably from Dungeons and Dragons. While he has written a module for the game and has contributed to several of the video games, he’s best known as one of the most prolific D&D authors out there. Over the course of the past thirty years, he’s written forty-two books in the series, as well as a number of short stories and other bits and pieces of media. Looking at his bibliography, it’s easy to see how he became so important to the overall world of role-playing games and those who enjoy the characters made therein.

R.A. Salvatore actually became a D&D writer through an audition. At the time, TSR needed someone to write a new Forgotten Realms novel, and Salvatore had recently submitted a manuscript to the company. Finding his style to be a good fit for the setting, Salvatore was able to begin work on the book that would soon become The Crystal Shard. One of the most important books in the whole Forgotten realms bibliography, it’s somewhat interesting to know that the book wouldn’t have come to pass if Salvatore hadn’t been asked to try out for a corporately-mandated position. 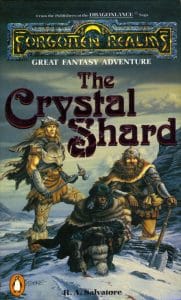 R.A. Salvatore burst onto the D&D scene with one of its most famous novel trilogies. The Icewind Dale trilogy introduced a host of memorable characters and locations, as well as setting up some of the tropes that would come to define the world of Dungeons and Dragons for years to come. The Icewind Dale Trilogy was well-received enough to garner its own video game adaptation and dozens of sequels. It’s definitely the best place to start with Salvatore’s work, especially if you want to follow the characters throughout the numerous novels in which they have appeared.

Outside of perhaps Gary Gygax himself, no one has done more to define the Drow than R.A. Salvatore. Not only is his most famous character a dark elf, but he’s also spent a great deal of time detailing how the subterranean society works. In fact, perhaps the best primer for those who want to learn more about the culture is Salvatore’s Dark Elf trilogy. Technically the backstory for Drizzt, it is also a fascinating look at a society that was largely unexplored before that point.

To say that Drizzt is R.A. Salvatore’s signature character might be an understatement. Easily one of the most popular characters in the Forgotten Realms, he’s been involved in one way or another in most of Salvatore’s D&D works. Though it seemed like Salvatore was ready to let the character go in the early 1990s, he came back to the character with a vengeance. There is an apocryphal story that Salvatore only came back to writing Drizzt because he was told that the character was going to move forward with or without him, but the veracity of this story is unknown. What we do know, though, is that this character is inextricably a part of his legacy. 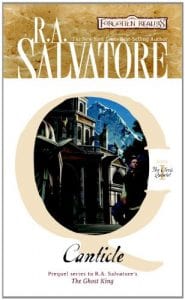 The Cleric Quintet was meant to be something entirely new for Salvatore. After all, he thought he was done with the Drizz’t books and wanted to take his writing in a new direction. These books were focused on a cleric and had a much more spiritual bent, with a cast of characters that was far different from Drizzt and his companions. Cadderly was definitely a different kind of D&D protagonist, especially compared to some of the more gung-ho characters that tended to populate the books. While popular, the Cleric Quinter wasn’t quite the success that some of Salvatore’s other books were and he soon found himself back with his older creations.

A rare set of works that don’t feature Drizzt in any way, the Sellswords trilogy books actually focus on two of the antagonists from other books. Artemis Entreri and Jarlaxle get a fair bit of page time in the Drizz’t books, but the antagonists really shine in these tales. When put forward as the protagonists, Salvatore was able to dive more deeply into the characters than might have otherwise been possible in one of this other works. The trilogy is notable for being incredibly well-reviewed, especially when compared to some of the later Drizzt books. In a way, this series captures some of the joy that was apparent in the earlier books.

War of the Spider Queen

One of the bigger works connected to Salvatore isn’t one he actually wrote. The War of the Spider Queen brought together a group of authors to further explore the society of the Drow, all under the watchful eye of Salvatore. This allowed for a great deal of fleshing out of a setting that Salvatore is perhaps best known for, all while giving a new group of authors exposure.

Though Salvatore didn’t work directly on the series, his influence is clearly felt in each book. As with most Drow-related works, it’s really hard to separate what’s been written from what Salvatore has done with the race.

Neverwinter and Other D&D Works

In the second decade of the 21st century, Salvatore’s been alternating between writing new D&D works and sticking with some of his old favorites. It seems like it’s impossible for him to leave some of his more famous characters behind, but that doesn’t mean that he hasn’t had a fairly big impact on the rest of the Dungeons and Dragons line.

One of the bigger series that he’s put together recently is the Neverwinter series. Set in and around the famous D&D city, the saga brings some of the surviving characters from the Icewind Dale trilogy into the region best known from the various video game adaptations. Well-received by critics, the books are a fun read.

Salvatore also wrote about The Sundering, the major event that changed up the D&D cosmic landscape for the beginning of the game’s Fifth Edition. Not exactly in line with his typical works, it nonetheless works very well as a primer for those who want to get into the newest edition of the game.

R.A. Salvatore might be best known for D&D, but that’s not all that he’s written. He’s been a prolific author, with dozens of short storiers and novels under his belt. Salvatore’s one of the rare authors who’s managed to do a little bit of everything and finding more works by him isn’t exactly a tough process. Below are just a few of the things he’s contributed in the world of fantasy and science fiction over the past few decades.

One of Salvatore’s biggest works outside of D&D has been in the DemonWars Saga. This high-fantasy setting has a lot in common in terms of tone and style with his D&D works, but it’s got a bit more freedom than one would expect in a company-owned setting. In addition to having the two sets of novel trilogies, the setting also featured its own role-playing game.

Salvatore might be the architect of the novels, but several other writers contributed to the role-playing game and comics. The universe more or less wrapped up around the turn of the millennium, but finding the books is still fairly easy and the audio adaptations are top notch. 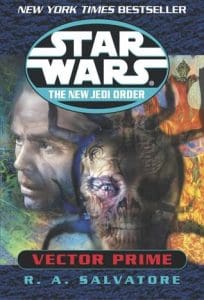 Salvatore also has some experience writing for one of sci-fi’s biggest franchises. His initial foray into the world of Star Wars was 1999’s Vector Prime, one of the more controversial books in the series. It did much of the heavy lifting to establish the new meta-plot for the series over the course of the next several years, but it certainly had enough controversial elements that its place in the overall Legends continuity is still debated today.

Somewhat less controversial was Salvatore’s 2002 adaptation of Attack of the Clones. The novelization was well received, with many feeling that Salvatore managed to salvage something from the much-reviled movie. Despite the reception of the novelization, Salvatore hasn’t worked in that universe since.

Over the years, Salvatore’s been a guiding in hand in adapting his novels for comics. Eight of his Dungeons and Dragons novels have been given a graphic novel treatment, and he’s also written a pair of other comics detailing the life of his most famous character.

In addition to this work, he’s also written the title Spooks with Larry Hama and Ryan Schifrin. The story of a secret government agency that deals with monsters and other supernatural threats, the book was relatively well-received and managed to attract some of the most highly-rated artistic talents in the industry.

R.A. Salvatore has had a few forays into the world of video games, working mostly as a scriptwriter. As one might expect, he did have a hand in at least one Forgotten Realms work, the role-playing game Demon Stone. While not particularly well-received by most players, it managed to snag a few awards and almost all the critics noted that Salvatore’s script was one of the game’s best elements.

Salvatore also worked on the ill-fated Kingdoms of Amalur, and his involvement was one of the main selling points of the game. Most who played enjoyed the unique story and characters, though financial difficulties kept the remainder of the projects set in that world from ever seeing the light of day.

R.A. Salvatore is a true legend of the RPG world. No matter how you feel about Drizzt and dark elves, you can’t deny that he’s had a huge impact on the characters that have been made over the last thirty years. Through his creation of compelling worlds and his fleshing-out of the ocncepts of others, Salvatore has helped to make Dungeons and Dragons a far richer environment that ever before. Fortunately, Salvatore doesn’t seem to be slowing down – so it looks like we’ll still have plenty of material from him to pour over in the years to come.

Dungeons and Dragons Novels: Where to Start

Why Forgotten Realms Books Are So Good