You are here: LitRPG Reads / Blog / LitRPG / How to read LitRPG like an ARPG designer

Today we have a special treat, a guest post by Edwin McRae. You can find out more about this new LitRPG author with a game development background on his author blog. As Edwin puts it, “I’ve been a screenwriter and story designer for over 12 years now. After four years of writing for television, I started with Grinding Gear Games in 2010 and became lead writer on the creative team that took their online RPG, Path of Exile, from 80,000 players to 20 million players. I’ve also worked with numerous Indie game developers, helping them to conceptualize their game worlds, their characters, their player experience, and to write the storylines, dialogue scripts and in-game text that turn those concepts into tangible and enjoyable stories.”

Writing for an action RPG teaches you a lot of great RPG storytelling basics that can be applied to LitRPG. And once you know of these techniques, they can help you become a more critical reader of LitRPG too.

I’m Edwin McRae, former lead writer of Path of Exile and author of Warlock: Reign of Blood – A LitRPG Novel. Below I outline three RPG narrative design techniques that you can be watching out for when you read your next LitRPG novel. NPC design, Story Glyphs and Boss fight buildup. Let’s start in with those NPCs.

NPCs Are People Too!

Through creating Path of Exile characters like Lady Dialla, Captain Fairgraves and Malachai, and seeing their effect on players, I came to realize how attached the audience can feel to the NPCs in a game. That connection comes from two key factors. Quests and dialogue.

Through quests you feel like you are doing someone a service, and the people we willingly serve are the people we grow to like and love. It’s very human. Whether you’re bringing your partner a cup of tea or driving Kit Harington to the set of Game of Thrones because his chauffeur spontaneously combusted, your act of service builds a bond between you. That’s how human relationships are built. We help each other out.

Dialogue is one way that we can make NPCs really stand out, especially in games where that’s the only method the writer has for the character to express themselves. While writing for Path of Exile I learned to roll three things into every line of dialogue:

When reading a LitRPG, pay close attention to how the MC engages with the NPCs and what those NPCs express through their dialogue. Is the MC doing the quest for the XP and loot or are they doing it out of a sense of connection with a character or in-game community? Are the NPCs blabbing on about themselves and their world, like that person who wants to tell you their life story on that long haul plane flight, or does their personality and knowledge peek with intriguing shyness from between the lines.

Desperately Seeking the Amulet of Yendro

Get your FREE copy of Roguelike!

Alex enters a roguelike embedded inside the Tower of Gates VRMMORPG. If he makes it out by avoiding Yet Another Stupid Death, he’ll gain an epic magic item and rejoin his companions. Was taking the chance and going into the roguelike his biggest mistake? Or will playing bring him even further riches and glory? Find out in this first supplement adventure in the Tower of Gates universe.

YASD! Aaargh! If you loved Rogue, Nethack, or any of the other procedurally generated RPGs, you should grab this book. Get your FREE book now!

Story glyphs are my name for a whole range of ‘story bits’ that I sprinkled like salt and pepper of the Path of Exile narrative. Diaries, graffiti, history books, plaques on arcane machines and flavor text on unique items. These ‘narrative bits’ are fantastic for sharing lore and boss backgrounds without getting in the way of gameplay or the main plot.

Flavor text is my favorite, and I’ve written flavor text for hundreds of virtual items, skills and spells over the years. This is why I put flavor text on all of my spells and important items in Warlock: Reign of Blood. It’s how I can build up bosses and legendary figures, quote by quote, so that the reader and the MC will already feel like they know that character before they finally meet them. 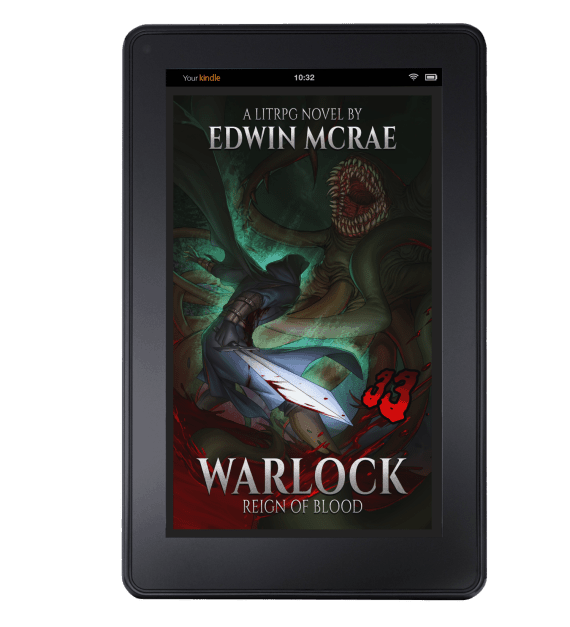 Build up your character and gear so you can slay the Boss. That’s the rinse and repeat cycle of just about every RPG, and it’s the defining feature of ARPGs like Path of Exile. Players grind very very hard to take down those big bosses.

But here’s the thing. As a LitRPG reader, I imagine you’ve killed a ton of RPG bosses in your time. How many of those bosses can you actually remember? Do you recall their names? Do you know why they had to be destroyed?

With Path of Exile I developed a ‘know your enemy’ policy where I tried to make sure even the most ‘click through’ player knew the basics about the boss they were going up against. Their name, how they became a boss, and why they have to die. I did this through NPC dialogue, story glyphs and through environmental storytelling where possible.

My proudest boss creation is still Emperor Izaro of the Lord’s Labyrinth, from the Path of Exile expansion called Ascension. For that I designed Izaro to be an omnipresent character, a disembodied voice that comments on each and every major event and achievement in the vast dungeon that is the Lord’s Labyrinth. Izaro is basically the voice of the labyrinth itself.

By the time the player fights Izaro’s monstrous incarnation at the end of the maze, they know him very well and are fair itching to take the obnoxious bastard down. Think about it. How much more satisfying was Emperor Palpatine’s death in Return of the Jedi compared to Snoke’s death in The Last Jedi? We have six movies to get to know Palpatine but only two to become familiar with Snoke. Familiarity goes a long way to making us care whether a villain dies or not.

When the MC faces off with a boss in the LitRPG you’re reading, how invested are you in that battle? How well do you know that boss? Is their name burned into your mind in big, black letters like the words “Darth Vader”? Do you know how he came to be such a monster? Do you understand why he must be slain?

In writing this article I realize that there’s so much Path of Exile XP I can still apply to my LitRPG reading and writing. For instance, with Warlock: Reign of Blood, I’ve use some but not all of the above techniques. I’ve built up the human boss but should use the same techniques for my monster bosses. I’ve used flavor texts to help express the lore but haven’t branched out into other forms of story glyphs. And I could do a little better with my quests, make them more personal to the NPCs rather than epic ‘save the world’ stuff. Ah well, writing is as much about learning as it is about producing, just like enjoying a book is far more important than finishing a book.

Thank you for your precious time, LitRPG Loremaster. I hoped you learned as much from reading this article as I learned from writing it.

Birth of a LitRPG Chatbot

What the Heck is the LitRPG Forum?

Why Do I Love the LitRPG Genre?
You are a gamer trapped in an RPG? Can you survive, solve the mystery, and escape? Get more info! ;