Riley always wanted to know what it would be like to live in an epic fantasy world. Now he’s found out! Growing up on the fantasy greats, such as J.R.R. Tolkien, Terry Brooks, Raymond E Fiest, Dragon Lance and the Lone Wolf Saga by Joe Dever, gave Riley much inspiration (and countless hours of daydreaming goodness) in building his own worlds.

Now in his 30’s, Riley Morrison has decided to put all this time making-stuff-up to good use and created the compelling world of the Caverns of Stelemia–which all begins in the book, Heir to a Lost Sun. When not dreaming up new ways to destroy his fantasy worlds or imperil his characters, he can be found spending time with his wonderful wife and playful son or out exploring in the bush, down a cave or in a video game world.

A long time ago in a time period far far away…

Late 1980’s, when I was around 7 years old. I attempted to write dozens of books as a kid and didn’t finish one until I was 14. That was a non-fiction book on prehistoric life.

These days Ebook, just because its easier and paperbacks just clutter the house with needless junk (I have a small house). But I do appreciate the feel of a real book in my hands and can totally see why some people still only read them.

Well, I will say a series instead, as this book series has like 33 books in it.

It was sorta kinda LITRPG long before most people knew what that was.

It fits that description, except it’s not set in a video game and instead an epic fantasy world. You can get all the books for free, just Google “Lone Wolf Saga free” Or Project Aon for ebook versions.

Heir to a Lost Sun. It was two years in production! Most of that editing hell as I learned the ropes of writing. It also introduced the World Simulator virtual world (World of the Visiondream as many of the characters call it) that is the sister game shard to my Visaria Online books.

So, Heir to a Lost Sun started two of my series. I wrote it from the heart, and its a mix of fantasy, science fiction, steampunk, post-apocalyptic, game lit… and probably some other stuff!
It was a grueling book to finish. But I did a bit each day and proved to myself I can complete a book.

But I never want to go through such an editing grind again! 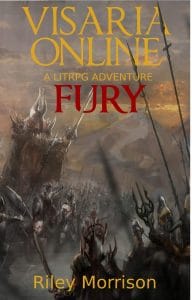 I thought I had it about 3 years ago, when I hit a roadblock in an earlier book I was writing at the time. But, it wasn’t through lack of ideas, just I plot problem I could not see a way out of without almost restarting.

If I feel uninspired now, I just do something else and come back to it. Or, if it lasts awhile, just write some other story or even just write something random that you can delete after.
I want to do this full time one day, so I ain’t got time for writer’s block!

Guilty Pantser. Guilty because I want to plan books out, but just get bored with it quickly and want to dive in and write. I have come up with some crazy stuff on the fly that is as much a surprise to me as I hope the reader. Why would I want to lose that sense of discovery and stick to a plan? Maybe One day I can be a discovery planner, I suppose!

Not very structured. I write when I can and normally do a few chapters and then edit them to near-final draft level. My first drafts are normally pretty clean now, so don’t require extensive editing. Sometimes I write in 15-minute writing sprints, but I find that much harder to do now that I am writing LITRPG.

I really don’t have a set location. I normally write on a laptop or tablet, so do it wherever. Like, on my tablet I write during the day doing my day job using a blue tooth keyboard and Google docs. On the laptop, I do it all over, including out in the backyard, the lounge, in bed! All over lol.

No idea, to be honest. I guess its somewhere in my cluttered mind. I’ve always been a storyteller, with a crazy imagination, so I guess some people are born with it and others aren’t.

What are your thoughts on how VR will affect the future of humanity?

I could write a whole essay on this topic and explore it in my books! Along with transhumanism.

So, I will simplify it into two lines of thought.

1. This one is explored in my upcoming LITRPG Raid Slayer. The world elites will push people inside of VR worlds and control their food and water intake to save the environment as well as reduce population growth. They will no longer need most of humanity due to technology advances and are left with an option like this or just murder everyone. Being addicted to VR games, and being the only way people can eat, means the vast population who outnumber the elites are kept docile.

2. Addiction to VR games will be a huge, societal issue in the late next decade. We will see the further breakdown of society and the creation of cultures and communities in the virtual world. While the real-world economy flounders, a new, open market for virtual goods and services, all in game, will be flourishing. This will mostly affect affluent, middle-class people in Western Countries.

3. A more positive one! It will be the next massive thing in gaming and will explode AI advances, photorealism etc and it will be hard to distinguish between the VR world and the real world. It will revolutionize education, meaning that humans are able to process more information and scientists will be able to experiment in real time, without real-world consequences. People will be able to communicate with each other like never before, by jacking into a VR world classroom and being able to take a class on whatever they want, sitting beside someone who lives on the other side of the planet. They could even hear the teacher in their own language… Anyway, I could go on endlessly lol.

Other than reading other LITRPG when I get the chance, most of my knowledge I put into my books comes from my reading/ watching of news on all sorts of topics. I also like philosophy so think deeply about a lot of things. This also helps with inspiration, as I can touch on so many things in my books and explore them.

Playing Super Mario Bros in hospital, around 1986, though I think we had a Magnavox Odyssey at home and had pong on it.

A LITRPG harem called Raid Slayer. Then book 3 of Visaria Online soon after.

Thanks for creating a community of LITRPG readers! It’s great that this genre isn’t so big, that there is a big disconect between the writers and readers. It’s great also that us LITRPG writers, who love writing and perhaps game design, now get to explore our love of both and can make a living doing so. I always wanted to be a writer and game designer, now I can without working for someone else inside their world!