Jamie Davis is a nurse, retired paramedic, author, and nationally recognized medical educator who began teaching new emergency responders as a training officer for his local EMS program. He loves everything fantasy and sci-fi and especially the places where stories intersect with his love of medicine or gaming. Jamie lives in a home in the woods in Maryland with his wife, three children, and dog. He is an avid gamer, preferring historical and fantasy miniature gaming, as well as tabletop games. He writes LitRPG, GameLit, urban, and contemporary paranormal fantasy stories, among other things. His Future Race Game rules were written to satisfy a desire to play a version of the pod races from Star Wars episode 1.

I first started writing stories in elementary school. My mother actually saved a bunch of the stories I wrote from fourth and fifth grade. As an adult, I’ve been writing in one form or another as a journalist for many years. I first began writing a novel in 2014, when a friend dared me to participate in NaNoWriMo (National Novel Writing Month NaNoWriMo.org). Challenge accepted! My first novel, Extreme Medical Services (a story about a paramedic who treats supernatural creatures) was written in November 2014 and after editing and sitting on it for a while, finally published in August 2015. By that point, the writing bug bit me good and I was hooked.

I mostly read a broad selection of fantasy and sci fi books. On occasion, I’ve also been known to read an occasional mystery thriller and I’m a total fan of Janet Evanovich’s character Stephanie Plum in her mystery comedy series.

I don’t really believe in writer’s block. I see it as a function of two things that are easily fixed. First, usually when I get hung up on a part of a story, it’s usually because I didn’t think that scene through well enough. Second, I treat my writing like my job. Sometimes, even in the best jobs, there are days you don’t feel like doing the work. Because writing is my job, though, I press on and make myself write something even if I know I’m gonna throw out most of it. It’s interesting that when I plow onward and make myself write, I find myself getting back into the groove within ten or fifteen minutes.

Originally a pure pantser, I am now more of a hybrid. I write a loose outline and create a few sentences for each chapter before I start writing. I also allow myself to explore new ideas for a story while I’m writing it so that outline is more of a guideline for how to get to the end of a story. I still get to the end of the trip but I don’t follow the strict directions on the road map to get there, if that makes sense.

I write 2-3 three hours a day, every day. I think writing is a habit and as such you can train your mind to get into creative flow very quickly if you set it to expect to write each and every day.

That’s hard. I think there are two answers to that question. I’ll always have a soft spot for my first novel and series, but honestly, I’m most fired up about the current project I’m writing at any given time. I think that’s important to making a creative profession work for you. 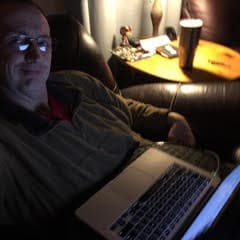 Here’s me at work. I write early in the morning in my recliner with a laptop and lap desk while listening to music before anyone else in my house wakes up. (And yes, that’s a Poe Dameron bobble head in the background.)

Story ideas are all around us if we keep our eyes open. For me I also have many of them kicking around in my overactive imagination where they’ve lived for a long time. For example, I’ve always been an avid role playing gamer in both tabletop and video game form. As such, I’ve always imagined what it would be like to get sucked into the game for real. That process turned into my “Accidental …” LitRPG series (Accidental Traveler trilogy, Accidental Champion trilogy).

I take an idea and write a three or four paragraph synopsis of what I think the story would look like. I also like to cast the main characters in the story using real life actors and actresses in some iconic roles to help me visualize the character and how they act.

Then I take the story and plot out the basic outline with a sentence for every chapter. These might be something as simple as “Big boss fight here.” I take each chapter sentence and plot it out with a paragraph or two to explain briefly what happens for me.

I recently started sending the “chapter beats” paragraphs to a developmental editor to look it over and see if there are any obvious plot holes or missed opportunities for character development and plot twists. Once that comes back from the editor and I fix any issues, I’m ready to write.

I’d want the superpower to inspire people to do great things and champion change. I know this is like saying I wish for world peace but I think as a writer, I have a tremendous amount of power to work important themes into my stories in a way that helps people understand other viewpoints and concepts. If I can inspire and challenge people to think about things that might ordinarily be alien to them, maybe some of them will stand up for what is right and bring about change in the world. How awesome would that be?

To paraphrase Dory, just keep writing. It’s a skill and everyone’s first book is worse than their most recent book. Keep practicing and don’t give up. Success for you could be just around the corner but you’ll never know if you just quit.

Favorite RPG of all time?

I’m partial to the original Dungeons and Dragons game, which I still own from my childhood. From a computer standpoint, I really enjoyed the Assassin’s Creed games and Skyrim.

I don’t think the two are mutually exclusive. You can offer a creative story line but still offer some of the things the reader expects in a book. No one had written anything about paramedics who run a 911 service for mythical creatures before. In that original story idea, I placed creatures that had powers and expected reactions that readers expected. I have vampires that can’t go into the sunlight or they turn to ash. I have werewolves who turn during the full moon. All of these meet expectations of the reader so they can connect to the original parts of my story in an easier way.

I’m working on finishing up the Accidental Champion LitRPG fantasy series now. After that, I’m considering an idea for a sort of cyberpunk sci fi thriller trilogy and I have an epic fantasy trilogy in the wings as well. Stay tuned!

I’d like to thank everyone who have read and enjoyed my stories. I write them for you and it warms my heart that so many people are entertained and inspired by what I’ve written. Don’t be afraid to reach out to me. I always respond back to email and contacts via my website and facebook page so please reach out and say “hi.”