Our next LitRPG author interview is with Christopher Keene. He penned the Dream State saga. The first book in the series, Stuck in the Game, was published back in 2016. He has a Bachelor of Arts degree in English Literature with Honors in Creative Writing.  Let’s dive right in to our interview.

Kindergarten… although I suppose you mean actual prose.

Long answer: I recall spending time on Windows 98’s Microsoft Word during lunchtime in primary school typing out the first draft of a book that seems will forever be my unpublished magnum opus: Fenix. If the 8th draft doesn’t get a contract, it might be my first work that I’ll go indie with. 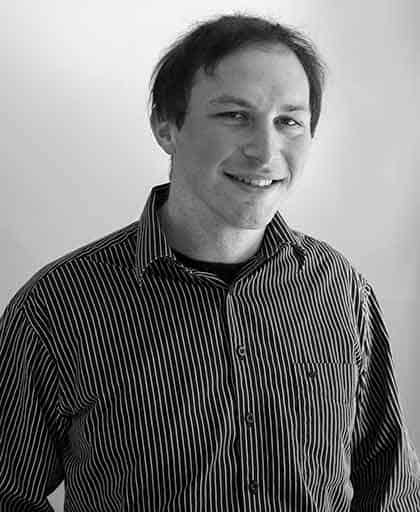 In fiction, anything fantasy and science fiction with the odd thriller sprinkled in-between, and the GameLit and LitRPG subgenres go without saying.

In non-fiction, I love popular science books written by scientists who my friends with academic careers in science consider legitimate enough to know what they are talking about. I’ve recently been reading books on evolutionary psychology and geography such as The Blank Slate and Guns, Germs, and Steel.

Only since I got published and started posting on social media.

To write I have to be excited and nothing gets me less excited than thinking about marketing a book or the failure of launching a book properly. It takes a long time for me to get over that phase of the process, and during that stage, I suffer from severe writer’s block and depression. I usually get over it by the third month after a book’s release, when I have given up on promoting that book entirely and enough ideas have accumulated to start another, although social media anxiety and money issues have a tendency to drag out this stage.

Needless to say, I will be staying away from Facebook after Ghost in the Game is out.

Don’t get me wrong, I tried being an outliner, but as mentioned above, I have to be excited to write and knowing what’s going to happen in the story lessens that excitement. Granted, this process involves a lot of editing, but in my opinion, most of the best bows and ribbons get added during this stage. I feel that if I planned out everything in advance, I would probably suffer the same thing Brandon Sanderson said he suffered as a young writer during his lectures, and just start on a new project as soon as I was done instead of going back and fleshing out the previous one.

I understand that this isn’t the case for everyone.

Most days I spend no time writing.

When I do write, I write fanatically and usually get the first draft of a book done within a month. The reason for this is that I’m a compulsive contrarian. If someone tells me that I have to do something, even if that someone is me, my compulsion is to simply not do it. This sounds childish, but it’s actually a real problem for me, and probably the reason I haven’t been able to hold down a proper job in a decade. So if I ever told myself “You have to write for X many hours for X amount of days” I most likely wouldn’t have a single book to my name.

In other words, it has to come naturally.

Excluding nostalgia, my favorite book is whatever I’m excited about writing at the time. That’s when I get the most out of them, and the most out of being a writer in general; most likely the reason I started in the first place. Sure, I want others to read them and to make a living off of my writing, but by that time I’m selling an old product when the one waiting to be written is the one I’m most excited about.

Including nostalgia, Fenix 2nd draft. It was my first completed book and there’s a good chance no one will ever get to read it. 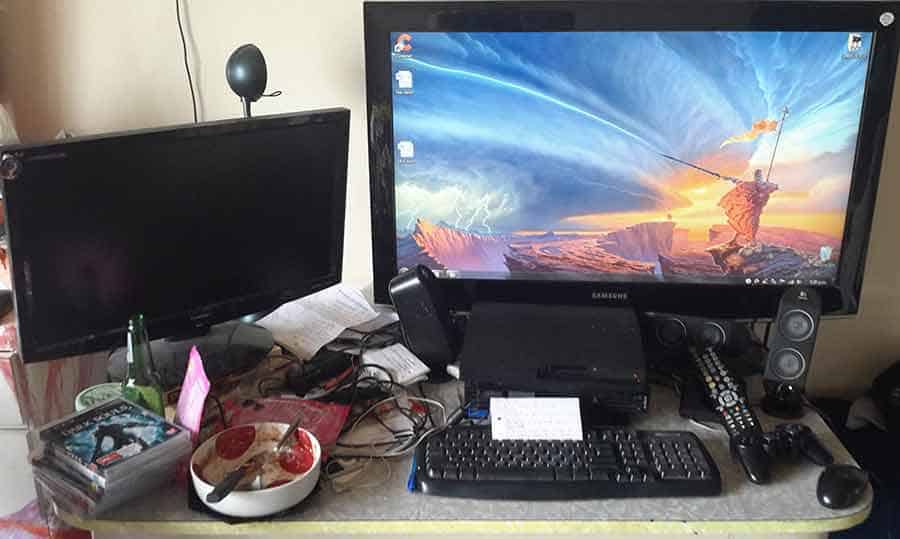 There is a subtle order to everything you see here, even the dirty dishes I’ll probably eat off again later on in the day.

J.V. Jones’ The Book of Words was my first taste of fantasy in high school and right away she became my favorite until I found Stephen King, beginning and ending with The Dark Tower series. Then Orsen Scott Card, Philip Pullman, Orwell, Huxley, Bradbury, Atwood, and Ken Catran (Who? The first LitRPG book I read, Running Dogs, was published by this New Zealander in 1998).

In University, like many others, I found out about Brandon Sanderson, Joe Abercrombie, Patrick Rothfuss, Brent Weeks, Scott Lynch, and Peter V. Brett. I then started playing catch up with authors like Matthew Stover, Daniel Abraham, Jim Butcher, Tad Williams, and Neil Gaiman before finally hitting Martin, Wolfe, Peake, Moorcock, Cook, Jordan, and just last year, Tolkien (yes, it took me that long to get to Tolkien).

At the moment, I’d probably go with V.E. Schwab.

By changing the context of things I observe.

These observations usually come from life or consuming other media and going “That would be so much cooler if…” or “What if I changed the context for that…” or simply “I’m totally gonna steal that, how can I steal that without making it too obvious that I stole it?”

For instance, there have been several awesome three-way sword fights in film (Qui-Gon and Obi-wan vs. Darth Maul), games (Genesis and Angeal vs. Sephiroth), and literature (Kaladin and Dalinar vs. Szeth), making me think, “I’m totally going to have a kickass three-way sword fight in my next book,” and therefore I built up the context for such a scene.

That’s my only spoiler for Ghost in the Game: there’s a kickass three-way sword fight.

I sit down at my computer and bring up a blank word document.

I then open myself up to the writing demon that possesses my soul and kind of just black out for a few weeks. When I wake up again, the word document has 60-70 thousand words in it, my girlfriend is making sounds of neglect, and there’s a pile of dirty dishes on my table. As bizarre as that might seem, I write so quickly and sporadically that my first round of edits actually feels like I’m seeing it for the first time and I am forced to clean up the mess the writing demon left behind, shaping it into something that might resemble a coherent story. My beta-readers help a lot with this.

When I was younger, I always thought controlling reality itself would be the best power as you would gain control of everything, but after a growing up, I realized that this could potentially affect everyone else as well. Now that I have a more libertarian stance on how people live their lives, I feel that just being able to control the way I saw and felt about my subjective reality would be enough, only changing it for others (be it for better or worse) if they made the choice for it to be changed themselves. And really, what would be the best way to control this than by manipulating how their brain works?

Do you read your book reviews? How do you deal with bad and good ones?

I love reading my reviews, especially the bad ones.

As mentioned in my answer about my writing process, for me writing is kind of like going to sleep. So when I get a bad review, it’s almost like someone telling me that I was caught sleep talking. Now I don’t know if someone has ever repeated something silly you’ve said in your sleep back to you, but it’s pretty damn hilarious, if a little embarrassing.

Good reviews are great too, but I see it as more a benefit to selling the book than actually helping me improve as a writer. Once again, it comes down to whether I’m prioritizing my marketing or the enjoyment I get out of the process.

What is your favorite childhood book?

The Dr. Seuss Collection. Reading those stories again as an adult makes me really think that guy was on some serious drugs when he wrote them.

Ghost in the Game, Book 3 in the Dream State Saga, is here. After that I’ve got several projects in the works, a near-future urban fantasy signed on with a literary agent, an augmented reality post-apocalypse LitRPG book I’ve started, another dark fantasy book I’m playing around with ideas for, and if you’re lucky, the 9th or 10th draft of Fenix will get a contract *fingers crossed*.

Sure, check out my blog. I’m going to be starting up a mailing list soon so be on the lookout for that. A big thanks to the LitRPG and GameLit community. Feel free to contact me with any questions you have over Facebook messenger and if you’re interested in being apart of my mailing list for getting free copies of my upcoming books. And if you’re interested in trying out my work, Stuck in the Game is the best place to start for those who enjoy LitRPG and Gods of the Mountain if you’re more into epic fantasy.