Another author interview with the wonderful James T. Witherspoon, author of Apocalypse 2020 and White Mountain. Enjoy the interview and stay-tuned for a lot more from us here at LitRPG Reads in 2018.

I’ve been writing since I was around six years old. I remember the first finished book that I wrote, along with a friend – it was shortly after Jurassic Park came out and we wrote about two friends in the woods being chased by a killer dinosaur-dog. Written out in pencil on construction paper and bound together with yarn. I wish I still had that thing – it was so bad.

I started writing more seriously about six years ago – I’ve written four novels that I’ve been trying to find a home for, and one so far that I published, along with a dozen or so short stories.

I mostly read fantasy and science fiction, though I tend to read a little bit of everything. I love Brandon Sanderson, R.A. Salvatore, and Scott Lynch. Stephen King is probably my favorite author of all time. I also like to read “bad” murder mysteries, and the occasional YA novel.

Summer of Night by Dan Simmons. This is one that I think a lot of fans of Stephen King would like. The story is like a better written version of It.

I’ve only published one so far – Apocalypse 2020 – so if we’re talking published novels, that is my favorite. However, I have a few unpublished ones, and if I were to include those, my favorite would probably be a story called The Chained God about a boy who finds an immortal man who has been chained to a boulder in a cave for a thousand years. It’s a YA novel I hope to get traditionally published one day, else I may eventually self-publish it instead.

Sort of? I believe that sometimes it’s definitely more difficult to write than at others. I’ve been hitting this a lot with my most recent book, where I just can’t come up with the words. It’s not really a block though, more of a speed bump that you have to work through.

I’m a big outliner. I usually don’t stick to the outline after I get going, but I like to have that roadmap there to guide me, else I’ll spend an hour staring at the screen when I start writing for the day.

I usually start with a summary of the story. I write this out completely, beginning to end, sort of like a condensed version of the entire plot. I take that, move some things around and split it into scenes. I’ll figure out the main plotline here, all the character arcs, side-stories, and add scenes to fill all of that out. By that time, I’ll have an outline for the story that tends to be about 10-15 pages long. I split that into chapters.

Then I write the rough draft. Plowing through, writing out each chapter in order. A lot of times, I will deviate from the outline and have to modify things a bit to make it fit where the story is going, but most of it tends to stay the same.

With the rough draft done, I read it from beginning to end, making notes where I want to change things with the plot or characters. Then I do another draft, making those changes.

Next read-through, I look for sentence problems, stilted dialogue, anything that sounds weird. Fix those.

I’ll share it with a few people at this point and get feedback, then do another draft keeping that feedback in mind.

Several more read-throughs to catch anything else. Then have a professional editor check it out and make any modifications. Print and ship.

Four, minimum. Sometimes I write a lot more than that, but I rarely write less than four hours. 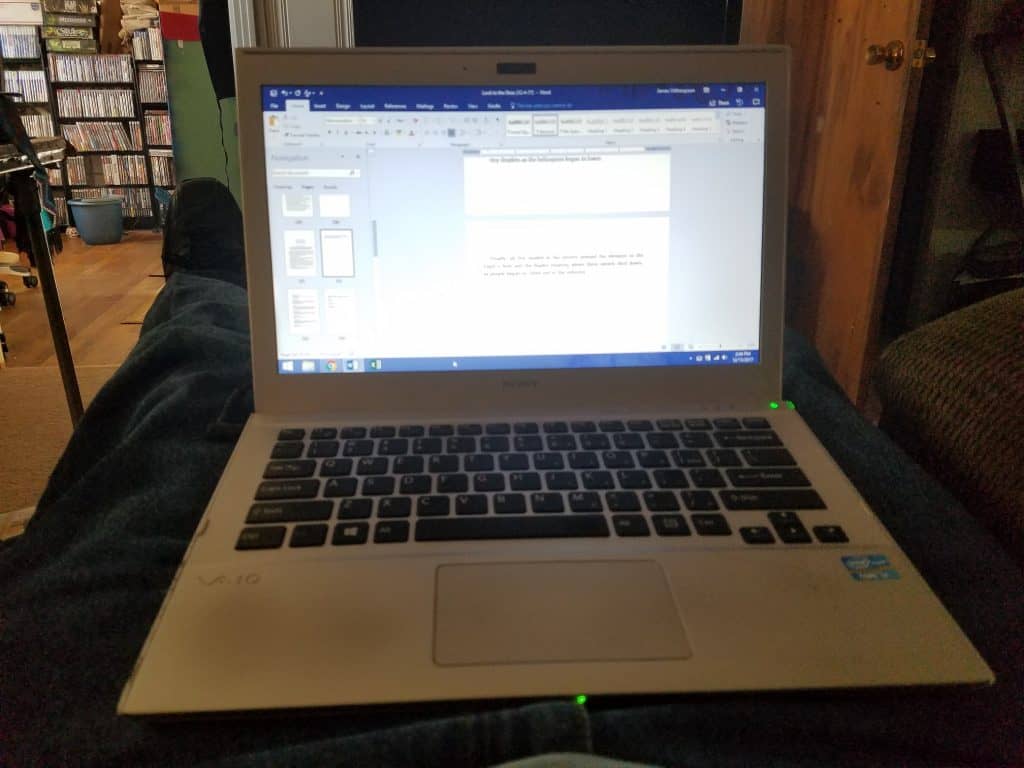 I tend to write in my recliner, on my laptop. This is my view at this exact moment. Those shelves in the back are some of my video games. The bucket on the floor is water for my turtle’s tank.

Oh, I kind of talked about this earlier, but – Stephen King, Brandon Sanderson, George R. R. Martin (even if he barely writes anymore), Phillip K. Dick, H.P. Lovecraft, Robert E. Howard, C.J. Cherryh, I’m sure there are a lot more, but these are the ones that come to mind immediately.

From everything. God, there’s like a million ideas that pop into my head a day. Everybody has ideas. Ideas are easy.

I’ve typed out responses for this and deleted them three times now. It’s a hard question for me. I would say that I try to be more original. I did things in Apocalypse 2020 that I knew readers would not care for. I didn’t use VR, instead opting to have the story take place in the nineties and the details filled in by the character’s imaginations. My main character is not very powerful, and is not surrounded by adoring women. Anybody who has read my novel knows that I did some other things towards the end of the book that most stories in the genre would not do as well. I didn’t do these things to stand out or be original, but because I tend to write the things that I want to read, even if that doesn’t necessarily line up with many other readers.

I have nothing against power fantasies or wish-fulfillment novels, but that has never been what I wanted to write. Some writers have had a lot of success writing towards a specific audience, but I just can’t do that. I write what I like, and I hope that the readers will accept and appreciate my stories, even if they are different than the most popular ones in the genre.

I’m writing (at least) two more in the Apocalypse 2020 series. The second book, Look to the Skies, will hopefully be released in January, and the third book in May. After that, I’ve been working on a standalone horror LitRPG that I hope to release on Halloween next year.

Thanks to all the fans, and the authors of the genre who build up and support newcomers like myself. You’re all amazing!