Author D.R. Perry lives in Rhode Island, where all her books are set. Although she’s not a native New Englander, once up north she got so inspired she couldn’t leave. A wild Northern Muse attacked. D.R. used Typing; it was Super Effective. D.R. writes all kinds of things. Mostly, they have strange and unusual elements. Not strange isotopes or Strontium or anything like that, but creatures who are people or people who are creatures. Beware of the Attack Poetry and rampant puns. Keep off the grass, or the song parodies may bite. She lives with her husband, daughter, and dog in the Ocean State, which she loves to remind people is not an island and not Long Island. D.R. is well aware that her home state has both of those things, but isn’t defined by them. Maybe she likes it here so much because it reminds her that she’s also more than the sum of her parts.

When did you first start publishing fiction?

In March, 2016. It all started with the Providence Paranormal College series, which is a comedy-drama series about a magical college for Young Adults.

I enjoy reading anything that has some hope in it because it’s fun. The best ones also make me laugh. One of the things I avoid are “dark” versions of genres because they’re just not fun for me to read. I did not like Game of Thrones. Defenestration of minors just brings me down, you know?

At times, I will get stuck with the direction a story or character is going. But I have ways of making them talk. Um, I mean, getting past that writer’s block. Mostly it involves Post-Punk music, rum, exercise, and ugly crying. Only three of those are things I actually do. I’ll let you decide which ones you’d like to imagine me doing.

I like to call myself a Plantser. This means that I have some things I’ve given thought to before I start and others which are blowing in the wind. Sometimes I know everything about my main character, down to how often they trim their toenails. Other times, I have a cinematic version of one particular combat scene on repeat in my head with little context and that’s all. More frequently, I’ve got all of the book, series, and chapter titles planned out and not much else.

Do you remember that scene in Harry Potter where Mad Eye Moody turns Draco Malfoy into a ferret and he goes nuts? My writing schedule is exactly that. discovering I have time to write is like Moody waving his wand and I’m on ferret mode. I go to town whenever the opportunity presents itself until my dog or my kiddo or my spouse come in and change me back into a regular person by asking me for something. The TL;DR version, in grammatically incorrect Latin: Carpe Verbum!

I love all of them so much. But the story that hits home most for me on an emotional level is Nine Lives because one of the main characters, Tony Gitano, came straight out of my heart. It’s the second-to-last book in Providence Paranormal College. 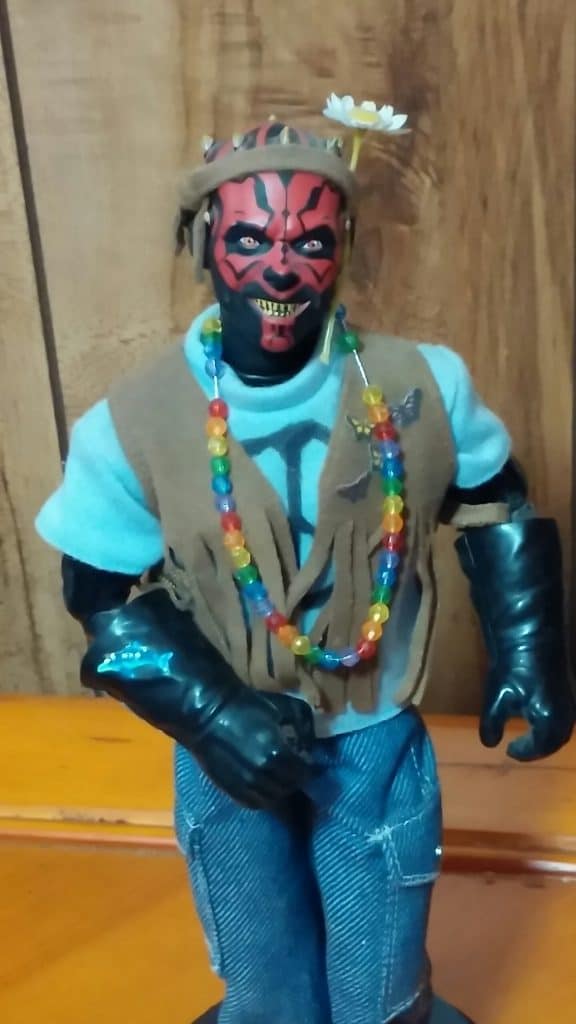 Oh good grief, no. Who’d want to see something like that? It’s atrocious in here, just trust me. My writing buddies are dust bunnies. Hey, maybe my next GameLit will have a giant literal trash Boss. Here, have a nice picture of the action figure who helps me stay focused on keeping it funny instead. I present: Hippie Darth Maul! (that’s the attached picture)

I grew up reading lots of spec-fic. As I got older, the ones I kept coming back to always had some form of humor in them. Terry Pratchett, Kurt Vonnegut, and Douglas Adams are all up there. But the one who continues to have the biggest influence on my work is Robert Aspirin.

Two words: What If? The answer to that question almost always finds me at an extremely inconvenient time, however. Like while I’m washing the dog, driving, or stuck in an elevator between the eighth and ninth floors at the Biltmore Hotel during NecronomiCon. Yeah, that’s a thing that happened once.

It’s all about getting a block of time to put my derriere in the office chair. And playing some music. I like making a specific playlist for each project or character I’m working with. It also takes very little effort for me to put on my headset and write, which is important because of the whole Carpe Verbum thing above. Much of the time, I’m writing before the sun comes up because that’s the only time nobody bothers me.

Star Trek or Star Wars? Why?

Star Trek. The scope of the setting feels bigger and I like that. I grew up on The Original Series and also loved the fact that they didn’t always take themselves too seriously. But if you hadn’t given me those two and let me pick my favorite science fiction franchise, I’d have said Stargate.

The most important thing is to develop a good habit of writing something every day. Either that or catch a case of Buttinseatitis. As long as you’ve got something to write with and an idea, either is fine. If your problem is not having ideas, get out and do something or watch other people doing things. Some of the best lines I’ve written came from something heard out of context on the bus or in the coffee shop.

Scrivener, hands down. In case you didn’t guess this based on my refusal to show a picture of my writing rig, I’m beyond disorganized. Scrivener keeps the chapters and notes from sitting in a towering and precarious pile that shuffles its inanimate coil off my desk at the worst possible moment.

What’s your favorite Fantasy movie of all time? And why?

Willow! It’s got nearly perfect comedic timing, adventure with suspenseful stakes, and a tightly focused group of characters. A close second is Labyrinth, for similar reasons.

A buttload of event appearances, for one thing. I’ll be at DragonCon in Atlanta, GA on the first weekend of September. At the end of that month, I’m signing at the Ignite Your Soul Author Event in London, Ontario because Canadians are cool. In October, I head to the Jewelry City Steampunk Festival. November means Rhode Island ComiCon in downtown Providence, RI. And then on December 1st, it’s signing and panels for me at the Rhode Island Author Expo in Cranston, Rhode Island.

I’m working through two series right now. The rest of 2018 will bring at least one more Challenge of Vircon book featuring a new lead character playing a Tanking Class, two more Urban Fantasy books about my reluctantly vampiric PI, and the third book in my Mafia-meets-magic Alternate History series. It’s a busy year!

But seriously. Here’s an order form if you’re going to be at any of the above events. It helps me plan how many suitcases I’ll have to pack.