After spending nearly two decades working as a creative executive for an animation and SFX studio, C.M. Carney decided to pursue his lifelong dream of writing and publishing novels and short stories. He writes sci-fi, fantasy and LitRPG that run the gamut from epic to humorous. His first novel Barrow King: Book One of The Realms was published in February 2018 and has become a #1 Bestseller in Norse and Viking Myths and Legends and a #1 Bestseller in Role Playing and Fantasy Games.

I wrote and drew a comic book called Super Max when I was maybe 8. I managed to overcome my serious artistic deficiencies one time, and after that, every panel featuring Super Max had him in the same pose because I had to trace him each time.

Decades later, after the normal hemming and hawing and wishing I was a writer, I worked as a development executive and writer for an animation studio in Orlando, Florida. During that time I filled a shelf full of notebooks with random ideas.

About two years ago I turned my gaze to novels, and after several stops and starts, I finally finished Barrow King.

I like both. I tend to read primarily indie authors these days, so my kindle is chock full. But for non-fiction I still prefer paperback.

Perfume by Patrick Suskind. It is not fantasy or sci-fi, but a historical novel about a serial killer in 1600s France. Great read.

Probably Killing Time. It started out as a reader magnet that I intended to be maybe 20,000 words, but the main character Lex wouldn’t shut up, and it ended up being a novel. It is a bit more overtly comedic than Barrow King or The Lost City. I love epic fantasy, but will always have a soft spot for well-done action comedies and British comedy shows like Black Adder and Red Dwarf.

Awaken Online. I think Travis Bagwell has created an epic everyman tale with complex moral questions. Also, I want to see big ass skeletons cutting down people. That being said, I’d pay to see quite a few movies made from our genre.

I used to, and I let it block me. Now I just slog through with butt in the chair. If you’re feeling blocked just write, anything. And try and write every day, preferably at the same time. You’ll be amazed at how helpful a schedule can be.

I come from a screenplay/teleplay background where we had to create outlines and stick to them. When I started with novels, I naturally outlined the hell out of my stories. But, along the way I found my stores taking me in unexpected directions, and I let it. It was very freeing. So I guess I’m a bit of both. I need to know the basics of the ending and the grand tent poles, but the meat on the ones often changes as I write. So, both I guess.

I spend a decent amount of time brainstorming and working on my outline. Again, screenwriting has gifted me with a great process for that. I need to know things like theme, antagonist wants/needs, the interaction of the characters, etc. Once I nail down the basics of my story, I write the first draft. If things fog well, I can usually do a polish/rewrite and then send it to my beta readers, get it edited and then do a final pass and have another few pairs of eyes reread it.

I usually get up, have coffee and breakfast, talk tot eh family and then go to my desk and put on my headphones. I listen mostly to soundtracks when I write because any music with words tends to make me put those words in my book. Apparently, I’d be a prime candidate for A Clockwork Orange kind of mental reprogramming.

Usually four to six, but that can decrease or increase on occasion, especially as a deadline looms. 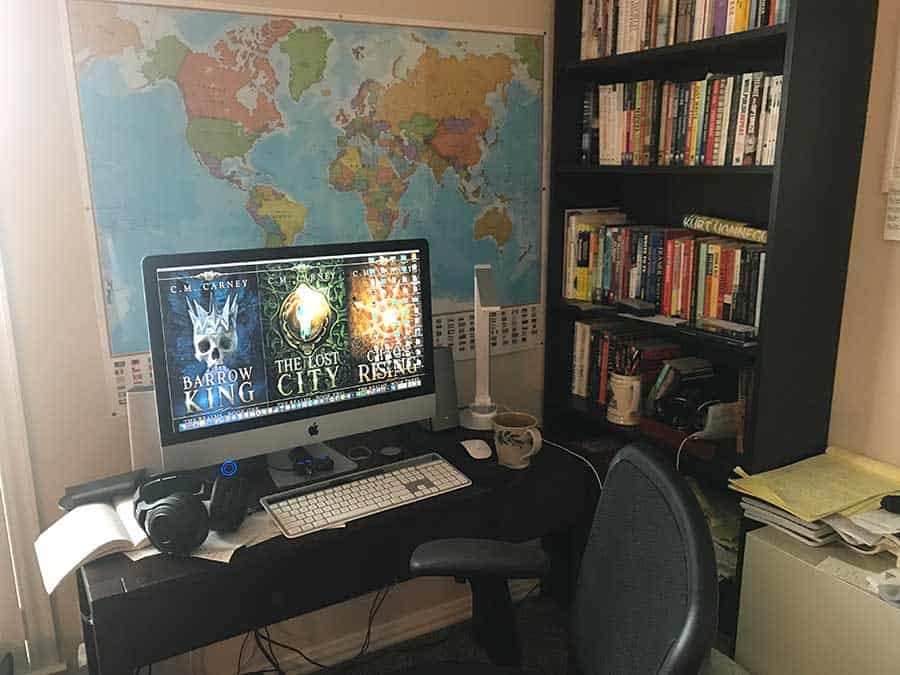 It is a small desk tucked in the corner of my book room (I once told my Mom that if I was ever rich, I wanted my own book room. She said, “honey, they call those libraries.” I was in my 30s I think, so yeah.

I write in Scrivener on an iMac, surrounded by books and maps. Out my window, I have a few green trees and far too much heat.

I devoured all of the great fantasy typically read by an 80’s kid. Tolkien, Brooks, Xanth, the Gor books. I was a massive Kurt Vonnegut fan in college. Before I discovered LitRPG, I skewed into Sci-Fi for a while, mostly epic space opera. I just finished Dakota Krout’s Ritualist, and when I am done my current launch, I plan to read the sequel.

As for LitRPG/Gamelit, I love Awaken Online, VGO, The Land, Dungeon Born, Threadbare, Emerelia, etc. I have far too many in my cue, so I’m open to must-read suggestions.

My pal Wade and I have long said they come from the aether, which is a concept I feature in my books (and will be expanding in later novels). Basically, I believe that there is an underlying layer to reality constructed of pure information. Physicists talk about this concept all the time, and I’ve stolen it and skewed it. Essentially I think creative types (and all of us really) tap into this later via our unconscious minds and then we mix and match and improve upon that information until an idea bursts forth. You know you may have a good one when the idea does not leave you alone. It can be apian, especially when a new one keeps slapping you upside the head where you’re trying to work on an existing project.

What are your thoughts on how VR will affect the future of humanity?

I am excited to see what it can do for telecommuting, both for education, work, entertainment, etc. There are both dangers and potential massive benefits, just like any game changing tech. Will we abandon our lives and become slugs or will it be the next step in our evolution? I suspect technology is close to a tipping point where our species will begin to diverge not multiple versions of humanity. This both thrills and terrifies me. We are not known for being overly gracious to those who are different from us.

I have been an avid reader my whole life, so, a lot of it has already been done and has percolated in my brain for years. I studied history and English in college, and I have a love for current science and technology issues. I’d say a good portion of my research is in my past, and my odd brain somehow mixes an old D&D campaign I played in the 80’s with an article I read on Futurism, and then some weird idea pops forth.

Combat on Atari 2600. I got it for Christmas one year. Unless you consider the original Pong machine owned by my great uncle. As for RPGs I lost way too much sleep playing Arena, the first Elder Scrolls game, back in the early 90s.

My next book The Lost City – Book Two of the Realms drops on August 17th. Then I’m on to the sequel Chaos Rising. I’ll probably complete book four before considering adding another series. I have dozens of notebooks filled with ideas that became The Realms, and I have a whole slew of other ideas in that world. I’ll probably look for co-writers by early next year. I also have a comedic Arthurian superhero fantasy idea that is profoundly influenced by Monty Python, Terry Pratchett, the Justice League cartoons and the idiocy, that I may write. That idea has been jumbling around in my brain for two decades, and oddly has always had a video game element to it.

Only that I am humbled by the response to the Realms thus far, and I hope to continue feeding you guys what you like. This community has been truly awesome, and I would not be here if it were not for folks like you and far too many others to name. Keep on writing folks!

Author Interview with Troy Osgood
You are a gamer trapped in an RPG? Can you survive, solve the mystery, and escape? Get more info! ;