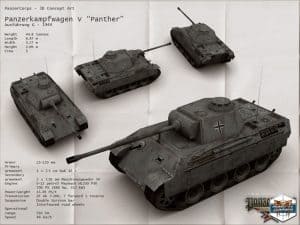 The transition from the tabletop to the computer screen hasn’t always been easy. Some war games eschew everything that makes tabletop great. Others stick too close to the formula, forgetting why they’d move in the first place. One game that strikes a good balance is Panzer Corps, a game with a fantastic lineage of innovation and change.

Panzer Corps owes a great deal of its history to Panzer General, a mid-90s war game that placed players in charge of a WWII General. The player had the options of playing as a general for either the Allies or Axis in the skirmish mode, but was cast in the role of a German general in the campaign.

This 1994 game took a novel approach to strategy games, both by hewing much more closely to the table top experience and by pushing forward certain mechanics that could only be used on a PC. A huge hit among strategy fans, it helped to spawn a more tactically-focused genre that persists to this day.

Panzer General eventually gave way to a series of sequel, all of which tend to be responsible for at least some of the features found in Panzer Corps. The first, and perhaps most important, of these sequels was Allied General. While it did little more than changing the focus away from German armies to Allied armies, it proved that the series would be able to sustain itself outside of its original title.

Panzer General II brought with it a move to better visuals and unit facings, both of which were influential within the industry. It was followed by People’s General (a WWIII game) and Panzer General 3D, which finally moved the unit models into a 3D space.

Future games in the series seemed to exist largely to try out new graphics styles or port the game over to new equipment. There was even an attempt at an MMO, one that never really took off. Still, it’s possible to look at several of these titles as early prototypes for what Panzer Corps would eventually attempt to do.

By the time of Panzer Corps’ release, the entire brand had fallen by the wayside. There were a few other titles out there that sought to carry the tactical turn-based army combat banner, but they’d been largely replaced by either RTS or Grand Strategy games. Purists were still playing the old games, but they were still looking for something new.

Panzer Corps takes all of the best parts of the games that came before it and throws them into a blender. It’s still a game that is very simple to control, but incredibly hard to master. The tactical combat is still there, but now with the ability to be tailored to the player. There are still numerous linked scenarios and the campaigns all exist – just on a grander scale.

Panzer Corps is the logical endpoint for the series. You can play as the Axis or Allies, you can take on multiple scenarios, and you can focus on the aspects of WWII combat that are most interesting to you as a player. It’s a fantastic attempt to take a twenty year-old combat sim and bring it to a place where it can be appreciated by modern audiences.

It’s important to note that Panzer General and its sequels had three specific areas of innovation that helped to define the series to come and separated it from most of the rest of the pack. The game took a novel approach to how campaigns would work, had mechanics that would make their way into many future strategy games, and made use of tactics that are both real for the time period and helped guide the tactical development of many future games.

Rather than creating a campaign out of whole cloth, Panzer General put players in charge of a German general in World War II. While he could start in a number of different locations, the game would proceed from there. While having historical battles available was not anything new at the time, the major change here was that forces would actually carry from battle to battle. Players wouldn’t be able to blindly spend their units, but they would rather have to preserve their forces so they could be used in future battles.

The campaign style of Panzer General would be one that would continue to future Panzer games. Players would become generals in a war, making them think about things long-term. Strategies that are common in typical war games are not viable in these games simply because of the level of loss they can cause. A win that comes out of a lengthy period of attrition can often be worse than a loss, as it guarantees problems in the future.

Campaigns can also diverge from historical fact in some situations. Panzer General allowed generals to march on Washington after overwhelming victory, and many of the later games in the series allowed for similar counterfactual events.

The mechanics of this series were established back in Panzer General, but Panzer Corps games have changed relatively little. This is a game that is less about resource gathering than it is about resource management. As a real army is unable to build tanks or train troops on the battlefield, the general in these games is forced to work with whatever he has on hand.

One of the major mechanics in the game is its reliance on combined-arms tactics. It was not possible to simply build strong units and steamroll one’s way through the game; instead, specific units required specific tactics to be defeated. Artillery could be used to soften positions, while tanks would be better at dealing with infantry. Likewise, one could build anti-tank units to take out armor, or bombers to take out entrenched positions.

The game also made use of a road system that had a huge impact on how quickly units moved. Given the nature of movement in the game, it was often more important to use roads (and bridges) effectively than to do almost anything else. While many modern games use terrain similarly, it’s possible to look at the Panzer games as early innovators.

Tactically, Panzer Corps moved far away from how many strategy games at the time worked. In most games, one could reliably count on destroying the enemy by simple attrition. Players could quickly pump out units and overwhelm the enemy, winning by sheer numbers. Even when this didn’t work, it would help to push out a stalemate long enough for the player to overcome any odds put in his or her way.

In the Panzer games, blitzkrieg tactics are not only encouraged but they are often necessary. Players who move past enemy units in order to accomplish goals tend to be more successful than their counterparts. In fact, one can often be more successful at the game by avoiding unnecessary combat than by attempting to completely wipe out the opposing army.

Players are also encouraged to protect their strongest forces. Because of the experience system in the game, units that survive longer are often more powerful and more valuable on the battlefield. These units become a double-edged sword, though, as their loss can wreak havoc on the player’s own army. As such, players are encouraged to use the units sparingly while still protecting them as valuable parts of the army.

The future of these types of games is very much in the hands of its players. The current trend tends to be fan-made sequels and remakes. These games take as much from the original games as possible, but update them to work with modern operating systems. While there is very little about these games that innovates, simply making them available for newer players has gone a long way to bringing life back to the genre.

Panzer Corps is, at its heart, the expression of an idea that is two decades in the making. It owes everything to the games that came before it, spending relatively little time innovating. If you’re a fan of the genre, though, that might not be such a bad thing. Sometimes, it’s nice to get into strategy for the sake of strategy.