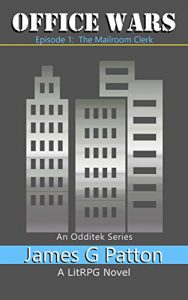 Bran was one of the first to purchase a full immersion Virtual Reality Pod that he calls the Coffin, but over a century later, ironically, he finds himself part of the 1% that does not live virtually. He sleeps in a real bed and eats real food and only jumps into Neuroma to work.

All he wanted was to log in, work and log out and live in general obscurity. Getting the attention of a CEO, meeting a stranger in real life, and forced to play in a secret game of corporations were not penciled into his calendar. While that was bad, he started to question whether Odditek was still in control, or had their complacency created the noose tightening around their neck.

Bran was not yet aware of the choice before him. He could no longer stand back and watch, and he had to pick a side and fight before he lost the ability to choose. Would he recognize the inevitable in time? Was it possible to make a ‘correct’ choice, or had the lines blurred so much that hero and villain were indistinguishable?