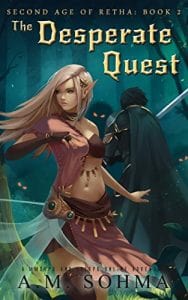 Chronicles of Retha was meant to be a full submersion video game filled with adventure and magic…but it has become a prison.

Kit and her party of misfit players have managed to collect two of the four seals that are required to face Malignus—Retha’s ultimate villain whose defeat may be the only way out of the game. Unfortunately for Kit—who is stuck playing as a defective elf dancer—the quest only grows more difficult.

The remaining seals are hidden in areas of Retha that Kit and her low-leveled party can’t fight through. Even worse, they will need to unite other players and guilds to face Malignus–an unlikely event as riots have spread across the game world.

Unwilling to give up, Kit and her party band together with Solus Miles—one of the best players in the game—and throw everything they have against Malignus.

But is their strength enough, or will Retha be their end?