You are here: LitRPG Reads / LitRPG Books / Fantasy LitRPG / Realm of the Nine Circles: The Grind
Spread the love 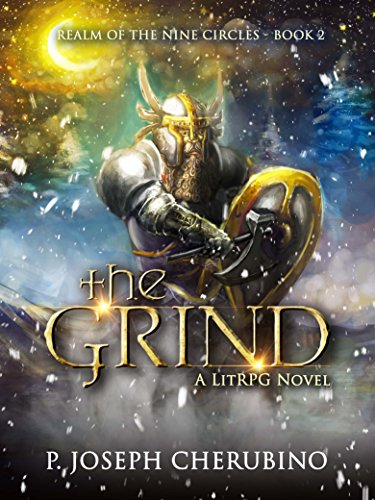 Realm of the Nine Circles, Book 2

Welcome to Plexcorp, the largest tech company in the world and creator of the world’s most popular MMORPG, Realm of the Nine Circles.

Through our pioneering research in artificial intelligence and self-organizing game worlds, we’re rapidly developing the technology that will allow you to experience the Realm as if it were real life.

Our cutting edge immersion virtual reality system is in late beta testing right now. You may be playing against our beta testers and not even know it.

In fact, you might be playing against the founder of Plexcorp himself, because he has gone insane and has put himself into a coma so he can become part of the game world and rule it like a god.

Plexcorp is run by an insane, super-genius criminal who tried to kidnap and kill his own employees to keep his technology secret. How exciting is that?

Dante Alger doesn’t think it’s all that great, but if he were in charge of writing press releases, that’s what he’d say.

Unfortunately, he can’t do that, because to stay alive, he made a deal with the devil. Now it’s Dante who’s keeping Plexcorp’s secrets as he dives deep into a virtual reality world to try to fix the system from within. He only left university a few years ago as a B student, and this is the first job of his adult life.

To make matters worse, he has to fix the game world with a level-one character who must reach level twenty in seven days or the system will crash. Why? Because his old character, Kalmond the Dwarf, a Rogue and a Thief, died a hero in the game world war that set the harvested brains free.

No cheating allowed. Dante must grind to survive.