You are here: LitRPG Reads / LitRPG Books / Fantasy LitRPG / Plague in the Greenwood
Spread the love 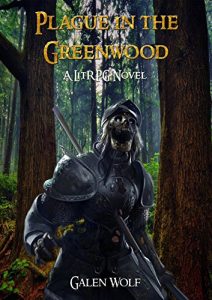 Rookie ranger Barcud thinks he’s defeated his enemies. He’s got them sieged behind the walls of their evil city, and then things go wrong.

From the air, he sees signs of a mysterious disease spreading from the east. Soon he realises this is an undead plague that turns all NPCs into ravening zombies.

There is a wicked intelligence behind the zombie plague and he must search for its source and wipe it out before the whole world is turned into a stinking pit of the undead.

With familiar characters such as the psychopathic Harald Runestorm, the foppish wizard Lamar, the furtive thief Jimmy the Zit as well as the shabby scryer Astral Bob and the ever serene antlered fey, Rohan, Barcud is in a race against time to save his world.

Gordan of Riss and the Malformed Sprite