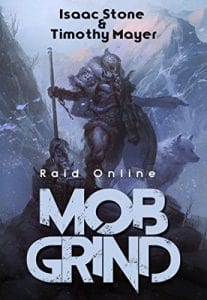 Enlil is one of the most fierce and successful warrior-gamers in the full immersion MMORPG known as Raid Online, developed by the government of a post-apocalyptic bunker society to keep the population entertained as they hide away from the polluted surface world.

With his warhammer and his wolf he has earned himself fame and fortune in this grim dystopia, all to help his invalid sister fight off a crippling disease.

Enlil must lead his adventure party into a new game expansion that promises glory and rewards enough for the group to buy their way out of the slums and into the higher levels of bunker living.

As they fight their way through mysteries and monsters, they must come to terms with deadly demons, treacherous competitors, and the challenges of a game scenario that is more savage than they could have possibly imagined.